Start saving money today with our FREE daily newsletter packed with the best FREE and bargain Kindle book deals. We will never share your email address!
Sign Up Now!
Who says a rising neurosurgeon can’t fall from his pinnacle? From the skullduggery taking place deep in the Tennessee woods to the silent tension in the OR, Doctor Danny Tilson’s life takes an abrupt turn after performing surgery alongside a scrub nurse with aqua eyes and a velvet voice.
Can Danny’s situation get any worse after the alluring lady disappears, he inherits her roguish retriever, and his Albert Einstein historical book turns up missing? A pack of Tennessee attorneys pursue Danny while he develops a scheme with his paramedic best friend to payback the mysterious woman who left in a hurry.
That’s the set-up for Dr. Barbara Ebel’s medical thriller Operation Neurosurgeon, introduced with a 7,500-word excerpt today through our Free Kindle Nation Shorts program!
SCROLL DOWN to read the free excerpt of Operation Neurosurgeon
But first, a word from … This Week’s Sponsor
A band of hunters–family men–fathers–grandfathers….
But one has taken the thrill of the hunt to a new level….
Suddenly you’re in his head….
And he’s in your face. 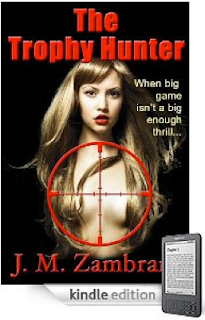 Text-to-Speech: Enabled
When attorney Diana Martin takes on a case referred by her best friend, private investigator Jess Edwards, the women cross paths with a group of hunters that includes the new client, his estranged son-in-law, and three other men who have more in common than hunting:  their women are disappearing.
Within the band of hunters, a psychopath hides in plain sight.  For him, the thrill of big game has lost its savor.  Now he collects ethnically diverse women of exceptional beauty.  And he’s learned how to keep them perfectly beautiful forever.
As Diana struggles with her self-image after a failed marriage, she’s tempted by the advances of her client’s son-in-law whose wife is one of the missing women.  Jess warns her of potential trouble, unaware that more than a broken heart is a stake for Diana.  In fact, both Diana and Jess have recently made the psychopath’s acquisitions list.
The Trophy Hunter — just $2.99 in the Kindle Store — is a full-length novel, approximately 75,000 words.

A Brand New Free Kindle Nation Short:
An excerpt from

Copyright 2009, 2011 by Barbara Ebel and reprinted here with her permission.
Chapter 1
–  2009  –
Through the desolate winter woods, she could see a run down single story house.  She firmly pressed the accelerator to climb the hilly, rutted road as pebbles kicked up from the gravel, pinging underneath her sedan. All around her, tall spindly trees stood without a quiver, the area still, quiet and remote. On this damp, cold February afternoon, she had come to conclude a deal with a man named Ray.
The road narrowed past the house, fading over the hill, but she veered slowly to the left, a barren area in front of the peeling house, where a dusty red pickup truck stood idle and a black plumaged vulture busily scavenged. Deliberately she left her belongings, clicked the lock on her car and walked to the front door. She threw the long end of her rust scarf behind her shoulder. The raptor grunted through his hooked beak as he flew off to the backwoods. The door opened before she knocked.
“Nobody visits a feller like me,” the man said, smiling at her while adjusting his baseball cap, “unless we’re buying and selling. You must be the lady with the book.”
The tidily shaven man wore a salt and pepper colored beard and mustache and an open plaid cotton shirt with a tee shirt underneath. The boots peeking out from under his blue jeans had seen muddy days.
The woman smiled pleasantly at him and went in the front door empty handed. If the man had any furniture, she wasn’t aware of it. Car parts lay strewn everywhere, which made her wonder if he slept in a bed.
Ray followed her glance. “You nearly can’t find one of them no mores,” he said, pointing to a charcoal colored, elongated piece of vinyl plastic on the floor. She looked quizzically at him and shoved the woolen hat she’d been wearing into her pocket.
“It’s an original 1984 Mercedes dashboard. See, the holes are for vents and the radio. Got a bite on that one from a teenager restoring his first car.” She didn’t seem interested though. She eyed the dust, in some spots thick as bread.
“Are you sure you have twelve-thousand dollars to pay for this?” she asked, unbuttoning her jacket.
“You come out thirty miles from Knoxville? That baby in your belly may need something,” he said, pointing to her pregnancy. “You want a soda or something?”
“No thank you,” she said, grimacing at him.
“Oh, yeah. I got the money,” he said. “All I got now to my name is seventy-five thousand dollars. I got ruint in Memphis. Was a part owner in a used car dealership. Went away for a little while, and the other guy cleaned me out. Can’t afford nothing like a lawyer to chase ‘im down.”
She tapped her foot.
“Anyhow, I won’t bother yer with all that. I got a thing going good on eBay. I got a reputation, it ain’t soiled. You can trust me, I give people what I tell them, whether I’m buying or selling.”
A beagle-looking mutt crawled out from behind a car door. “Molly, you’re milk containers are dragging on the floor. Better get out to your pups,” the man said, prodding her out the partially closed door.
“You like dogs?” he asked.
“I suppose so.”
“I got no use for people who don’t care for dogs. Something not right about people like that.”
The woman turned and followed the clumsy dog outside, grabbed a bag from the front seat, and came back in. She took out a book, opened the back cover, and handed him a folded piece of paper. Certificate of Authenticity, the man read, from a company in New Orleans, verifying the signature on the front page to be Albert Einstein’s. He inverted his hand and wiggled his fingers, gesturing to her if he could hold the aged book.
“Where’d you say you got it?” He observed her carefully.
“It’s been in the family for years. I took my precious belongings with me when I left New Orleans because of Hurricane Katrina. Since I lost my house there, I decided to stay in Tennessee. Now I’m selling my expensive things. I have to make ends meet, especially with a baby coming.”
“Good thing you got this certificate with it, then. Twelve-thousand dollars, we’ve got a deal.”
He walked away to the back of the house while she held on to the physicist’s 1920 publication. He came through the doorway with a stack of money and a brown paper bag. She nodded once when she finished counting the bills, so he handed her the empty bag.
“I still got your email address and phone number,” he said. “I keep track of what goes and comes.”

“You won’t need them,” she said and left abruptly.