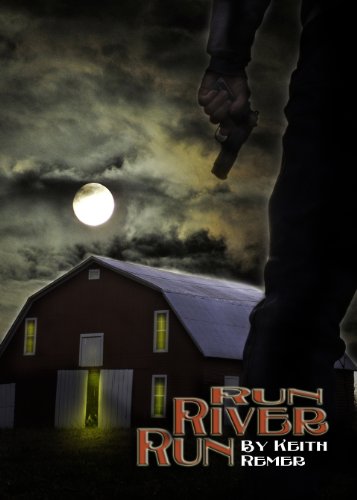 5.0 stars – 11 Reviews
Kindle Price: $1
Text-to-Speech: Enabled
Don’t have a Kindle? Get yours here.
Here’s the set-up:
River Yates is a descendant of both the outlaws and lawmen that battled in the San Bois Mountains of the Oklahoma Territory. River was once as rambunctious as any of his ancestors, but that was before the voices of his brutal past started calling from the big red barn on his ranch. Now the legendary River is not the man he used to be. In order to protect a newfound love from the homicidal antics of a madman, he must overcome the fears of turning back to the tactics of the River Yates of old.
One Reviewer Notes
Having waited an interminable time for Run River Run to come out I was quick to download it to my kindle. I expected Keith to keep my attention, and he did. I couldn’t put the book down. I loved it. Keith tells a good story, and a believable one. His Silver Dollar Saloon brought back many memories of rousting drunks out of the Silver Dollar in Oklahoma City when he and I were young cops. Keith puts just enough twists and turns in the story to keep you wondering what’s going to happen next, but not so many that you get lost trying to keep up. I love the way Keith melds old time western values with modern times. He is a great story teller, one who I hope keeps writing for a long time. – Amazon Reviewer, 5 Stars
About The Author

International award winning author Keith Remer is a native Oklahoman. As such, he realized long ago there are no better breeding grounds for thrillers than the trailer parks, oilfields, churches, ranches, skyscrapers and meth-labs of the Bible-Belt. Remer fills his fictionalized accounts with the products of the region’s western, Native American, outlaw, and fundamental Christian cultures to produce unforgettable characters who bring his unique plots to life.Keith is a retired army colonel. He spends his retirement as a small-time rancher and adjunct college professor. In the late 70’s and early 80’s he took a ten-year break from the army to serve as an Oklahoma City police officer. During those years he policed the roughest precincts of the city. Remer’s specialized military training awarded him opportunities to join the S.W.A.T. team and bomb squad.

Keith was raised as the son of an oilfield roustabout. He spent his formative years in shanties and mobile homes as he was moved from one oil boom town to another. He rubbed elbows with relatives who were outlaw bikers long before putting those types in jail. He’s been in bar fights and shoot-outs and has shaken the hands of two American Presidents. His stories are a product of his background.

To date, Keith has written eight novels and converted two into screenplays. At the insistence of a number of producers and directors, he intends to adapt all his novels for the big-screen.