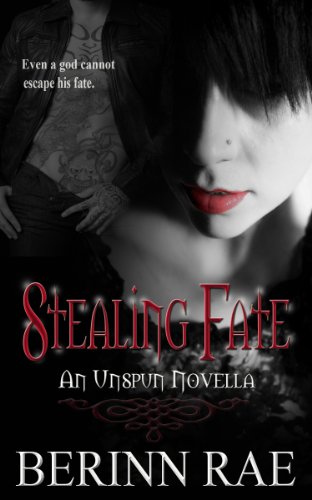 by Berinn Rae
4.5 stars – 10 Reviews
Kindle Price: 99 cents
Text-to-Speech and Lending: Enabled
Don’t have a Kindle? Get yours here.

She stole his fate…

Lachesis is a Fate, an ancient goddess in whose hands our destinies are unraveled. When she’s not weaving fortune, she does what she wants when she wants. That all changes when she runs into the man she craves but prayed to never see again. And she’ll soon discover the god of terror can really hold a grudge.

The most frightening of gods, Phobos is a predator who takes pleasure in terrorizing the world. After millennia of relentless searching, he finds the Fate who caused him to be cast down from Olympus. Now he plans to use every bit of his talents on the goddess to regain his lost heritage without losing his heart in the process.

Stealing Fate is a 20,000-word standalone novella (about 100 pages) in the Unspun series, which sheds light on the Greek Fates, three ancient goddesses who played a role in many myths. The other Unspun novellas are Creating Fate by Rachel Firasek and Chasing Fate by Elle J Rossi.