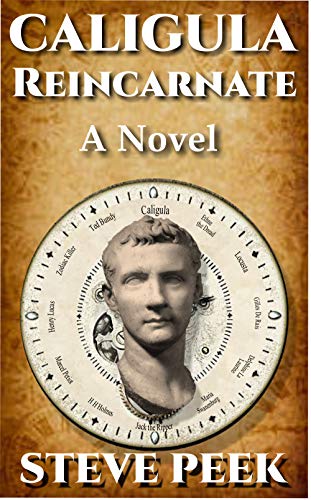 1805, along the Mississippi River, a twelve-year-old son of slaves walks toward the river to meet his friends. His thoughts are on fishing and fun. The next minute he is possessed by an ancient spirit, Caligula reincarnated. Caligula assesses the difficulty of making this boy rise to power. Not promising. The friends meet. Caligula slaughters both, dumps their bodies in the river then joins them with an anchor tied to a foot. He drowns knowing endless lives await him.
1888, Fritz is a member of Europe’s wealthiest family. He visits London regularly; his family business works with the British military. At night, he walks less refined areas. He lures women to take him to their homes and he, in return, takes their lives. Early the next morning, before the butchered body is discovered, he is on the family yacht, sailing back to Europe.
2020, Sarah, a terminally ill business consultant, and reluctant psychic, touches a two-thousand-year-old bust. A slow change begins as the spirit of a Roman who died at Caligula’s hands enters her mind.
The two sharing the same body set out to find this generation’s reincarnation of Caligula and stop his evil once and for all.

“It has been decades since I’ve read a character with Caligula’s depth and evil,” Herbie Brennan, The Irish Times

“It is a rare author who can truly write heroes and monsters equally well, Peek succeeds.” SF Chronicle