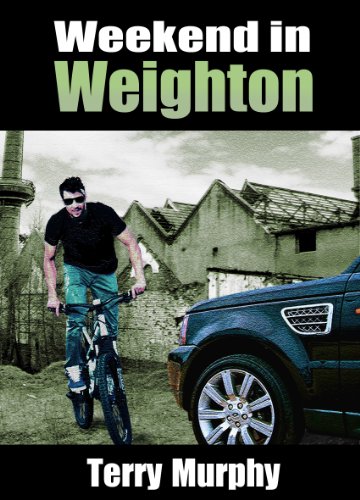 by Terry Murphy
4.9 stars – 7 Reviews
Kindle Price: $2.99
Or currently FREE for Amazon Prime Members Via the Kindle Lending Library
Text-to-Speech and Lending: Enabled
Don’t have a Kindle? Get yours here.

First-time private investigator Eddie Greene is having a bad weekend. It’s about to get worse …

When he finds the slab-cold body of his first client, he knows something’s up – he only spoke to her fifteen minutes earlier.

Free-wheeling, swash-buckling, trash-talking Eddie is not just out of place in a humdrum northern town. He’s out of his depth on his first case, out of funds from a now deceased client and out of favour with Weighton’s big society.

As Friday night slides into Saturday morning, each twist in the case turns a bad situation worse; the police want him for murder, the local crime boss wants him dead, the mayor wants him out of town and his girlfriend wants him out of her life.

Increasingly desperate, Eddie takes on all-comers in a barnstorming bid to crack the case and clear his name. And somewhere between all the froth and fury, his affections are reclaimed by the girl who got away – but will she abide ‘til Monday?

“Great fun with some cracking jokes – ‘this femme is fatale’ being my favourite – it reminded me of the Lynne Truss serial on Radio 4.” Sue Fletcher, Deputy MD, Hodder & Stoughton

Kindle Daily Deal: No Mark upon Her

Best-selling author Deborah Crombie’s deeply atmospheric and twisting mystery is filled with deadly secrets, salacious lies, and unexpected betrayals. When a woman’s body is found, Scotland Yard Superintendent Duncan Kincaid finds himself heading a complicated investigation, for the victim was a high-ranking detective who had many admirers, and many enemies.