The Egyptian (The Dominic Grey Series) 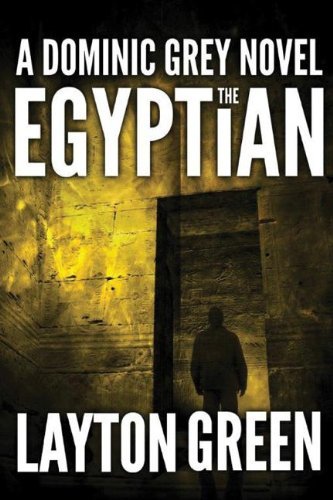 4.4 stars – 126 Reviews
Kindle Price: $3.99
Text-to-Speech and Lending: Enabled
Don’t have a Kindle? Get yours here.
Here’s the set-up:
The second book in a globe-hopping thriller series whose protagonists investigate the world’s most bizarre and dangerous cults.

At a mausoleum in Cairo’s most notorious cemetery, a mercenary receives a package containing a silver test tube suspended in hydraulic stasis.An investigative reporter tracking rogue biomedical companies is terrified by the appearance of a mummified man outside her Manhattan apartment.A Bulgarian scientist who dabbles in the occult makes a startling discovery in his underground laboratory.These seemingly separate events collide when Dominic Grey and Viktor Radek, private investigators of cults, are hired by the CEO of an Egyptian biomedical firm to locate stolen research integral to the company’s new life extension product. However, after witnessing the slaughter of a team of scientists by the remnants of a dangerous cult thought long abandoned, Grey and Viktor turn from pursuers to pursued.From the gleaming corridors of visionary laboratories to the cobblestone alleys of Eastern Europe to a lost oasis in the Sahara, Grey and Viktor must sift through science and myth to uncover the truth behind the Egyptian and his sinister biotech – before that truth kills them.

“Stirring and imaginative, with an engaging premise that is briskly paced. Both the characters in the story and the reader are in for a wild ride.” – Steve Berry, New York Times bestselling author of The King’s Deception

“James Bond and the X-Files had a love child, this book would be it.” – Keryl Raist, To Publish or Not to Publish

Layton Green is the author of the Dominic Grey series. Please visit him at www.laytongreen.com for additional information on Layton, his works, and more. You might find him in the corner of a dark and smoky café in Bogotá, researching the next Dominic Grey novel.