The Emperor’s Opal (The Journals of Preston Black) 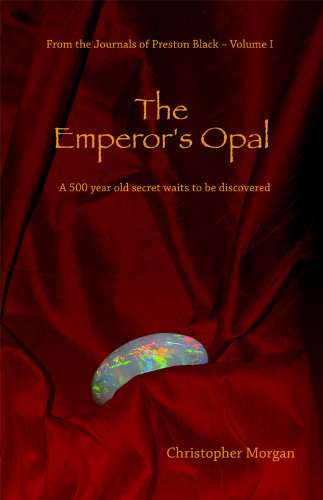 The Emperor’s Opal (The Journals of Preston Black)
by Christopher Morgan
Kindle Price: 99 cents
Text-to-Speech and Lending: Enabled
Don’t have a Kindle? Get yours here.
Here’s the set-up:

So what? Six months ago, I wouldn’t have cared. My name is Preston Black and until quite recently, I was a senior partner in a small, but successful advertising firm, a confirmed bachelor and a stay-at-home New Yorker. Then, while stopping in for a beer at a pub in Greenwich Village, I met Tamantha McKinley, a student at the New York campus of the University of Wizardry. Yeah, really. All I wanted was a date. Instead I got pulled into a world where vampires, along with ghouls, faeries, pixies and trolls went from being creatures of fantasy to things as real as you and me. I got an offer I couldn’t refuse and became the proprietor of the only store catering to the needs of New York’s magical community.

As crazy as that was, what happened next was worse. I was commissioned by a Count of the Spanish Vampire Court to find a very special white opal named Orphanus. The opal, lost 500 years previously, was believed to have magical properties that might save the vampires. While difficult, this quest wasn’t supposed to be dangerous. That would all change as new players entered the game. The line between good and evil became increasingly blurred. I was forced to rethink all I believed in while Tammy and I were racing across central Europe, dodging sorcerers, demons and magical traps. Tamantha McKinley, my newly minted wizard partner, would be tested as we neared the end of our journey. You see, Orphanus, the Emperor’s Opal, contained enough magical power to greatly enhance the abilities of any magical creature and Tammy was both gifted and ambitious. I wasn’t at all sure she would be able to resist its lure once we found it. What would happen to her if she couldn’t? For that matter, what would happen to me?

A beautifully rendered portrait of life in rural Ireland, Christina McKenna’s debut novel charms and delights with its authentic characters and gentle humor. This vivid portrayal of the universal search for love also brings with it a darker tale, heartbreaking in its poignancy.