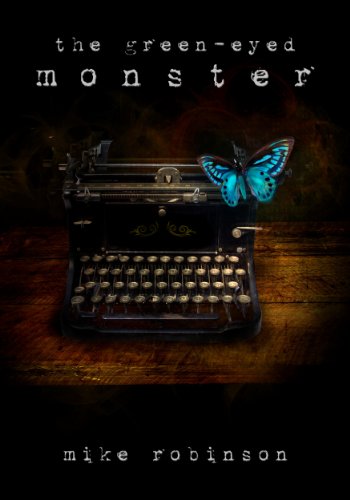 5 Rave Reviews
Kindle Price: $4.99
Text-to-Speech and Lending: Enabled
Don’t have a Kindle? Get yours here.
Here’s the set-up:

The pen is truly mightier than the deadliest sword.

Their words have power — to heal, to kill, to change the lives of their “characters” in shocking and unexpected ways. Famous for their uncanny similarity in both physical manner and literary voice, their childhood rivalry spins out of control into adulhood.

The death of one at the hands of the other brings to light their troubling past — and a mysterious presence, watching on from the shadows — an authorial entity with roots beyond our time or dimension; an entity with far-reaching designs.

5-Star Amazon Review
“Mike Robinson’s latest release, The Green-Eyed Monster, is a compelling and unique work. I found the genre label especially attractive: literary horror. It seems like an oxymoron. Just to explore that unique title relationship, I absolutely had to read this book. I’m happy to say this story delivers what it promised. If you feel intrigued by the concept, I highly recommend you pick up this book.”
About The Author
It was at the tender age of 7 that an interconnection of cells and organs called Mike Robinson (then Mikey) penned, or pencilled, his first story. Called “Aliens In My Backyard!”, it went on to become a runaway bestseller, topping international charts (or maybe that just happened in his imagination, too).

Although he has since worked as an independent videogame producer and cinematographer, writing has always been the focal point of his creative life, although to him the phrase “creative life” sounds a tad redundant. His first professional sale, a short story entitled “The Hand of Spudd”, appeared in Storyteller Magazine when he was 19. Since then, his work has appeared in a dozen magazines, anthologies and podcasts. In 2006, he was one of five guys comprising GLAWS, the Greater L.A. Writers Society, which has since become the second largest writers’ group in Southern California. He’s the editor of “Literary Landscapes”, the society’s publication. See more at: www.glaws.org

“Skunk Ape Semester”, his debut novel, was released early 2012 by Solstice Publishing and was a Finalist in the Next Generation Indie Book Awards. His follow-up, the supernatural mystery novel “The Green-Eyed Monster”, debuted October 2012 from Curiosity Quills Press. His existential horror novel “The Prince of Earth” is also available.