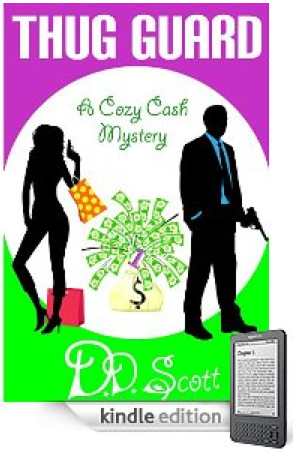 
Amazon Top-Rated and Bestselling Romantic Comedy Author D. D. Scott is gettin’ “cozy” with all your fave Bootscootin’ Books Characters.with Book One of her new Cozy Cash Mysteries.Think The Rachel Zoe Project meets Bond, James Bond and a Madoff-style, Ponzi-scheming King.
Hollywood Stylist to The Stars Zoey Witherspoon is a wanna-be Stephanie Plum, and to that end, she’s now moonlighting as a badge-toting P.I. But on her way to style one of her infamously diva-esque clients, she discovers her first Dead Guy in a Range Rover parked next to her. And this isn’t just any dead guy. It’s the guy with a Russian mob connection, who her former client, King Bernard McCall, hired to knock her off.Bond, James Bond-style Double Agent Roman Bellesconi is hell-bent on bringing down Ponzi-scheming King Bernard McCall. Why? Because (1) that’s his job. But also because (2) he’s got a lot more at stake than job security. If he doesn’t bring down Bernie, his family’s monarchy will be destroyed.As the dead guys keep piling-up around ‘em, Zoey may be damn sick of Roman’s deep and very dark secrets, but, she’s also convinced that perhaps, like Roman’s been reiterating, it’s only because he’s keeping those secrets that they’re both still alive.

But is there a way for their cover to be blown, Roman’s secrets thus revealed, and each of ‘em live to tell about it?

Praise for The Bootscootin’ Books (BOOTSCOOTIN’ BLAHNIKS, STOMPIN’ ON STETSONS, and BUCKLES ME BABY):
“Wow! I loved this…The descriptions are so vivid and colorful it really feels like the reader’s going through the same wild rollercoaster ride…It’s a funny, sexy, sassy attitude of a read, and I can’t wait to get stuck into the next one.” — Sibel Hodge, author of The Amber Fox Mysteries “I laughed from page one on…The author has a way with twisting phrases. Bootscootin’ was a delight. I’m loading up on her other books. She’s a shoe-in for one of my favorite chicklit authors.” — Barbara Silkstone, author of The Secret Diary of Alice in Wonderland Age 42 and Three-Quarters “Are you ready for a really fun read? I hope so…So sit back and get ready to laugh.” — Karen Cantwell, author of Take The Monkeys and Run “…who doesn’t need a laugh? Laugh ‘til you (you fill it in) with D. D. Scott’s BOOTSCOOTIN’ BLAHNIKS, and more…” — Steve Windwalker, Kindle Nation Daily

Visit Amazon’s D.D. Scott Page
D. D. Scott is a Bestselling Romantic Comedy Author and a Writer’s Go-To-Gal for Muse Therapy, plus the #1 Amazon Bestselling Author of MUSE THERAPY: UNLEASHING YOUR INNER SYBIL and the co-founder of The Writer’s Guide to E-Publishing, your destination site for Everything E-Publishing.

Her bestselling and Amazon top-rated romantic comedies are all about sexy, sassy, smart, career-driven women and the men who complete them. They’re a bit chick lit with a gone-country twist…and now a cozy mystery twist too.

She’s agented, and her Bootscootin’ Books Series – think Sex and The City meets Urban Cowboy – debuted August 2010, on Amazon’s Kindle and at Smashwords, with BOOTSCOOTIN’ BLAHNIKS, followed by STOMPIN’ ON STETSONS and BUCKLES ME BABY. Now, The Bootscootin’ Characters are gettin’ “cozy”…as in Cozy Mystery cozy, with the release of THUG GUARD, Book One of the her new, Cozy Cash Mysteries, featuring all of your fave Bootscootin’ characters plus tons of quirky, new characters too.