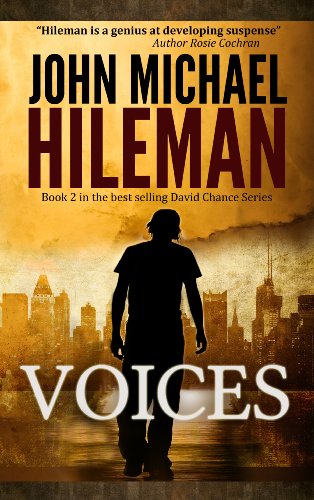 4.9 stars – 27 Reviews
Kindle Price: 99 Cents
Or currently FREE for Amazon Prime Members Via the Kindle Lending Library
Text-to-Speech and Lending: Enabled
Don’t have a Kindle? Get yours here.
Here’s the set-up:

Six months after strange messages lead David Chance through a gauntlet of lies and terror, they are back—this time drawing him unwillingly into a murder mystery involving an elusive teen with a mysterious gift.

Jon Blake is a troubled teen with faint aspirations of escaping Boston and attending college, but when the voices in his head save his life and begin revealing hidden secrets, he finds himself lured into a national conspiracy involving the FBI and powerful businessmen.

These two lives, guided by unknown forces, weave together in unexpected twists toward one inescapable conclusion.

5-Star Reviews From Amazon Readers
“Really great story–intricate, thought-provoking, and full of surprises. I would recommend it to anyone. Second in a series but stands alone just fine. Starts with a bang and then unbelievably ramps up even more at about the halfway mark. If you’re looking for a book you can get lost in, you don’t need to look further.”
“This is John Hilemans’s second offering in his David Chance series – I honestly could NOT put it down and found myself reading it from cover to cover in one sitting. When one chapter ends and the setting has shifted, there’s no doubt but that you will find yourself reading on to pick that thread back up! Love the characters and message (no pun intended) and looking forward to number 3!!”
About The Author

Regarding Suspense Mystery and Supernatural Thriller author John Michael Hileman: After serving in the U.S. Army, John Michael Hileman started a small 3D animation company. From there he was hired as production director for a television station, where he oversaw the production of three semi-national television programs. In his spare time, while being a faithful husband and father, he authored his first book, VRIN: ten mortal gods, which later placed in the top four of a national writing competition. Encouraged by this, John went on to write the #1 best selling supernatural thriller MESSAGES, and his latest release UNSEEN. The rest is yet to be written.

Check out John’s blog at: http://mystery-novel.blogspot.com/.