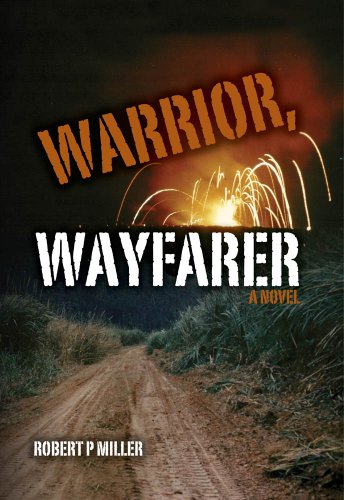 5.0 stars – 5 Reviews
Kindle Price: 99 cents
Text-to-Speech: Enabled
Don’t have a Kindle? Get yours here.
Here’s the set-up:
Love, War, and God; It’s 1969 and a skirt-chasing cad–an Army draftee and an antheist–chooses officer training over immediate deployment to Vietnam. He falls in love with a beautiful graduate student, then saves a female correspondent from being arrested. In Vietnam, he finds himself in mountainous jungle with a sergeant who refuses to relinquish command of the platoon. His correspondent friend travels with him during a major operation of the war, and his grad student girlfriend joins him on R&R in Hawaii. Back in Vietnam he faces his “foxhole moment,” followed by an even more momentous upheaval. “Warrior, Wayfarer” has been praised by retired colonels and women-only book clubs.
Reviews
“As an Officer Candidate School lieutenant and Engineer platoon leader in Vietnam, I fully related to the Army experiences of Warrior, Wayfarer’s protagonist, Press Patrick. It’s good that this story is available for reading enjoyment and future reference.” – Amazon Reviewer, 5 Stars
“If you think Warrior Wayfarer is an indepth and interesting review of a reluctant soldier’s experience in Officer’s Candidate School and through an action packed tour in Viet Nam, you would be correct…but there is so much more to this book. The life experience of a war zone and testing of leadership’s accountabilities with a struggle to determine if there really is a God is artfully woven in to this novel. Add the stress of balancing personal relationships and decisions about how to live life during and after Viet Nam’s chaotic era makes this an enjoyable and thought provoking read.” – Amazon Reviewer, 5 Stars
About The Author
Robert Miller graduated from the University of Wisconsin-Madison in 1968. A decorated Army combat engineer officer in Vietnam, his platoon spearheaded a major operation of the war. He served in many domestic and overseas assignments during 36 years with John Deere and now resides with his wife in Florida and Wisconsin. Work began on Warrior, Wayfarer in 1990, following the publication of his article, “The Road to Laos” in ARMY Magazine.
(This is a sponsored post.)
Search