While You Were Shifting:

A Hot and Humorous Shifter Romance 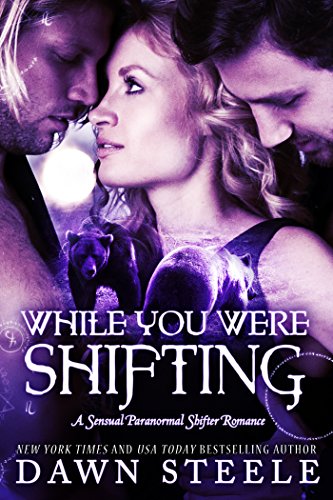 JOIN THE ‘WHILE YOU WERE SHIFTING’ VALENTINE’S DAY CONTEST FOR THE CHANCE TO WIN 3 AMAZON GIFT CARDS by FEB 14th!

Every weekday in Wendy Fraser’s humdrum life, a tall, dark and handsome guy would walk into the café she works at and order hash browns to go. But he never notices her. Why should he? She’s only an assistant fry chef. Her hair is in a net and she’s in coveralls.

Until one day, their eyes meet across time and space, and he smiles at her! Ohhh!

This is enough to send Wendy into a tizzy. On a lark, she follows him as he comes out of the train station one day. Good thing, too, because Mr. Handsome promptly trips over a stray brick and knocks himself into a coma.

A distraught Wendy mutters, “You can’t die on me. We’re going to get married and all, now that I’ve finally met you.” She doesn’t mean for anyone to overhear it, but someone does.

In the ensuing confusion, she is mistaken for his fiancée. She meets his estranged billionaire family, who are just DYING for Dylan (Mr. Handsome) to be engaged to someone he loves. “You may be the catalyst who saves our family,” Dylan’s bear shifter father declares.

Kirk, Dylan’s fraternal twin brother, isn’t so sure as he suspects that something is not right. Wendy knows that sooner or later, she has to reveal her secret, but how can she do it without hurting the family she has come to love?

Then Dylan wakes up . . . with unexpected consequences.

WHILE YOU WERE SHIFTING is a romantic comedy and shifter tribute to ‘While You Were Sleeping’. For more details on the contest, check the book and answer these two questions:
1. WHO DID WENDY CHOOSE IN THE END, AND WHY?
2. WHAT WAS DYLAN’S BIG SECRET?

5 STAR AMAZON REVIEWS
“I can’t get enough of Dawn Steele’s romance books and this one may be her best. In addition to being a very sexy story, it’s a take/parody on one of my favorite movies ever “While You Were Sleeping” with the hero being a SHIFTER! There’s laughter and sweetness and yet the author injects her own twist on the story, making it even better.”
“Wow! I loved it! Hands down, one of the funniest books I’ve ever read! The story was exciting, captivating, entertaining, hilarious, endearing, sweet, romantic, sensual. The dialog was well written, smart, sassy, and down right hysterically funny. The characters were sexy, adorable, warm, inviting and fascinating. I couldn’t stop laughing!”
CLICK HERE TO VISIT DAWN STEELE’S AUTHOR PAGE