The Paranormalist: Servants of the Endless Night 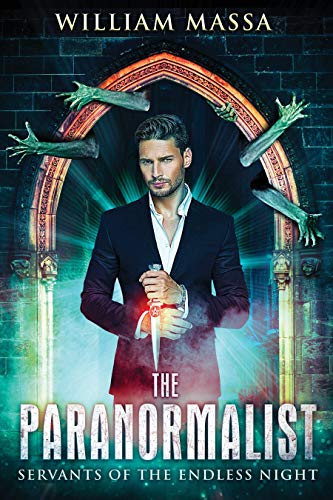 When the host of a paranormal reality show is found murdered inside a haunted house, demon hunter Simon Kane is the man to handle the case.

My father worshipped the forces of darkness. I fight them.

Fifteen years ago, the FBI took down Mason Kane, the most notorious black sorcerer and cult leader the world had ever seen. The media called him a monster. To me, he was just ‘Dad.’

I was only thirteen when the Feds raided my home and put an end to my father’s reign of darkness. Ever since then, the infernal deeds of my father have haunted me. I’m cursed, branded with a name that strikes fear into the hearts of everyone who hears it.

Perhaps that’s why I’ve devoted my life to becoming an expert on the occult and applying my knowledge for good. Armed with the magic of my father’s ceremonial blade, I assist the world’s law enforcement agencies when things get weird.

I’ve faced all sorts of otherworldly horrors over the years. Vampires, demons, witches, ghosts, sorcery—and that’s just the tip of the iceberg. But no matter how many monsters I defeat, will it be ever be enough to wash away the sins of my father?

Other books in the Paranormalist series:

Servants of the Endless Night – Book 1

Curse of the Abyss – Book 2

The Paranormalist is the beginning of a fast-paced occult horror adventure series full of chills, twists, and mystery. For fans of supernatural/paranormal dark urban fantasy action. 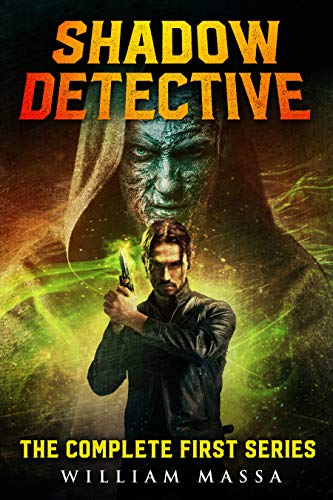 The first nine Shadow Detective books in one boxset. 1600 pages of gritty, fast-paced urban fantasy with scary monsters and creepy supernatural elements. For fans of Constantine, Supernatural and Dresden and readers of urban fantasy and supernatural paranormal action thrillers.

My name is Mike Raven. The weird and supernatural are my life.

The forces of darkness shattered my life when I was just a boy. I watched with horror as demons murdered my parents, and I would have been the beast’s next victim when fate intervened in the form of Joe Skulick, the greatest monster hunter who ever lived.

The monster slayer saved my life that night. He took me in, trained me, channeled my rage. He turned a frightened boy into a determined young man sworn to destroy the demonic forces which orphaned him. Armed with my knowledge of the occult and a mystical arsenal, it’s now my turn to hunt the nightmares.

Join me on my thrilling adventures as I stalk supernatural horrors and seek out deadly sorcery. Tag along as I battle ghosts, vampires, ghouls, witches, demons, supernatural serial killers, eldritch cults and other assorted abominations.

Grab your copy now, and let’s kick some demon butt!

What readers are saying about the Shadow Detective series: Full of action, dark humor and sarcasm. Well written with tons of action and surprises. Fast-paced and original. The series has completely blown me away. A perfect blend of urban fantasy and supernatural thriller. My favorite Supernatural Action Chiller series.

My name is Erik Cross. I’m an expert in extinct languages and a professor of archeology.
Most of my students would call me mild-mannered. But there is a beast in all of us. And mine is about to break free.

It all started with a phone call from a beautiful archeologist. Natalia Creed needed my help translating a recently discovered manuscript. No one told me I was about to be drafted in a war that has been waging since antiquity.

A WAR BETWEEN MEN AND MONSTERS.

Marked by a beast, I’ve become a fugitive, pursued by a secret organization of monster hunters. And I’m changing. Dark thoughts of violence fill my mind. I’m turning into a creature of the night. The voices of the wild grow louder with each passing moment. Will I be able to resist their savage call long enough to stop humanity’s greatest enemy?

OR WILL I SUCCUMB TO THE PANTHER CURSE? 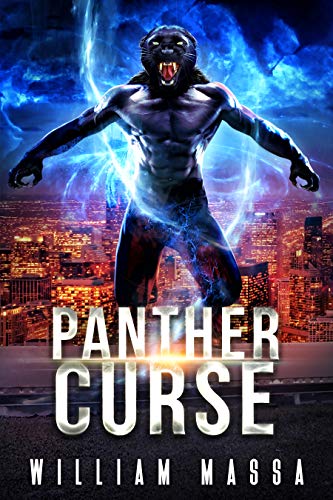 Apocalyptic cults. Cursed relics. Paranormal terrorists. Only one man stands against the forces of darkness. After his fiancée is slain by a murderous cult, a professional soldier dedicates himself to a new mission–hunting down twisted occultists around the globe.

After a decade spent fighting the enemy abroad and keeping his country safe, Delta Force Operator Mark Talon is ready to put his military career behind him and settle down with the love of his life. But Talon’s world crumbles when his fiancée becomes the victim of a diabolical cabal. The military man now has a new foe in his crosshairs, and this promises to be a very different war.

The person responsible for his beloved’s death is a Silicon Valley tycoon allied with the forces of darkness. Fusing cutting-edge computer technology with an ancient evil, the enemy here cannot be stopped by bullets alone. If Talon is to be victorious in his mission of vengeance, he will need to master a new method of warfare — the arcane arts! He must become… the Occult Assassin. 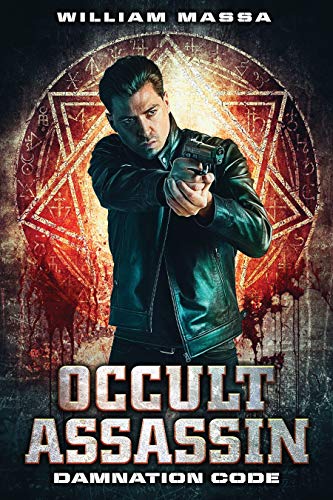 “William Massa has the beginnings of another brilliant series with Night Slayers. Jason Night, Swat team commander is unfortunately introduced to the world of magic and supernatural on the same day his entire team is decimated by something he can’t explain. He now is leading the charge in the fight against evil that he didn’t know existed with powers he is still learning to believe much less trust. Where will this series go from here? I can’t wait to find out.” – Amazon Review

FROM COP TO DEMON HUNTER.

My Name is Jason Night. I’m a SWAT Team Commander and former Marine. I’ve experienced a lot of crazy shit in my life, and I don’t scare easily. At least not until today. After seeing my whole team get wiped out by a succubus and nearly dying myself, I’ve been recruited by a mysterious sorceress to become a soldier in a new war.

A WAR AGAINST MAGIC AND MONSTERS.

An evil web of darkness threatens our world, a global network of black wizards and creatures of the night known as the Cabal. They are everywhere and nowhere. Controlling our society from the shadows. Leading us toward the apocalypse.

THE TIME HAS COME TO FIGHT BACK.

I faced terrorists abroad, battled criminals in the rough streets of Los Angeles, but nothing prepared me for the next chapter in my life. I have to master magic and spells, battle vampires and shifters, warlocks and witches, demons and ghosts. And resist the charms of monsters as seductive as they are deadly. One thing is for sure—the future won’t be boring. 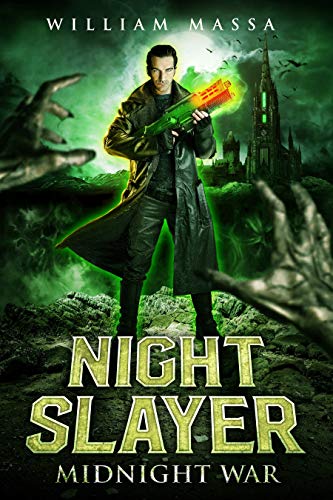 FROM COP TO DEMON HUNTER.

My Name is Jason Night. I’m a SWAT Team Commander and former Marine. I’ve experienced a lot of crazy shit in my life, and I don’t scare easily. At least not until today. After seeing my whole team get wiped out by a succubus and nearly dying myself, I’ve been recruited by a mysterious sorceress to become a soldier in a new war.

A WAR AGAINST MAGIC AND MONSTERS.

An evil web of darkness threatens our world, a global network of black wizards and creatures of the night known as the Cabal. They are everywhere and nowhere. Controlling our society from the shadows. Leading us toward the apocalypse.

THE TIME HAS COME TO FIGHT BACK.

I faced terrorists abroad, battled criminals in the rough streets of Los Angeles, but nothing prepared me for the next chapter in my life. I have to master magic and spells, battle vampires and shifters, warlocks and witches, demons and ghosts. And resist the charms of monsters as seductive as they are deadly. One thing is for sure—the future won’t be boring.

“Fun, exciting, and sexy as hell. Night Slayer was a thrill ride from page one. Mr. Massa gets better and better with each book. Can’t wait for the next one!”

My name is Mike Raven, but the world knows me as the Shadow Detective…

Orphaned by demons at the age of ten, I have dedicated my life to keeping the world safe from nightmares. Trained by one of the greatest monster hunters who ever lived, and armed with an arsenal of mystical weapons, I battle forces beyond human understanding. Trust me, it’s not as glamorous as it sounds.

The Shadow Detective Boxed Set collects the first three supernatural action thrillers of the bestselling urban fantasy series in one place for one great price. You get: Cursed City, Soul Catcher and Blood Rain.

My name is Mike Raven. I hunt nightmares.

Demons murdered my parents when I was eight. Turns out my folks were paranormal investigators and Hell always settles its scores. Naturally I decided to join the family business.

For two decades I’ve studied the occult and traveled the world fighting monsters. Vampires. Shifters. Demons. Ghosts. I’ve faced them all. But my biggest challenge lay ahead…

From the moment Celeste stepped into my office, I knew she was in trouble. Black magic trouble. Her father had promised her soul to a powerful demon on the day she was born. Now, twenty-one years later, the forces of darkness were gathering to collect their long-awaited prize.

My name is Mike Raven. I hunt monsters. But today the monsters are hunting me.

The spirit of a diabolical killer has returned from the grave to stalk the woman I love. Guess who’s going to pick a fight with a dead murderer and his legion of the damned?

My name is Mike Raven. I’ve always hunted monsters. But now one of them is the woman I love.

I tried to save Detective Jane Archer’s life. Instead I turned her into a creature of the night.

I know she’s out there. Hunting. Killing.

It’s only a matter of time before our paths cross. Before I must make a terrible decision: Do I put her down or let my city drown in a rain of blood?

“I can recommend all three books in this set! I really enjoyed the mixture of noir detective mystery with the paranormal/urban fantasy vibe. Definitely a must-read for fans of those genres!” 5 star review 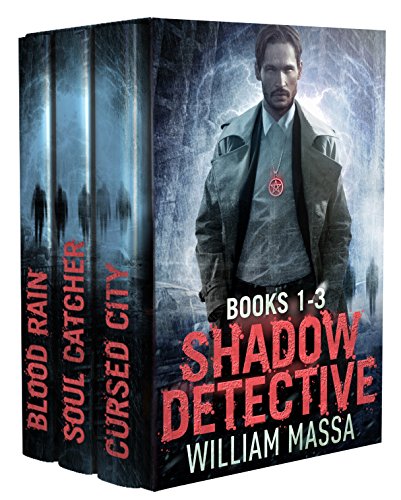