Kindle Nation Daily Free Book Alert, Tuesday, December 28: Phenomenal Girl 5? International Intrigue with Noel Hynd? Take Your Pick! plus … a novel like no novel I have ever read: “On 15 March 2110, 6.3 billion people will die” in TAG by Simon Royle (Today’s Sponsor)

Accompany Noel Hynd’s Special Agent Alexandra LaDuca on an American President’s visit to Ukraine, or meet Lainey Livingston, aka Phenomenal Girl 5, or learn why reclusive author Sara Walsh hides from the public … all free, and all in this morning’s latest additions to our 225+ Free Book Alert listings….

There will be reviewers who will call it science fiction. I don’t think so.
Let me put it to you this way: Was 1984 science fiction? Or John Hersey’s Hiroshima? Or Nevil Shute’s On the Beach?
Not precisely, right? 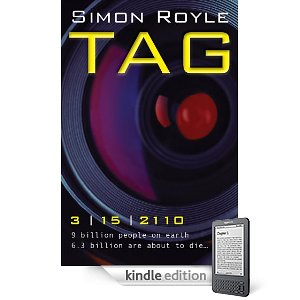 But there’s something else, too. Simon Royle has a bit of Ken Follett in him, in his capacity to concoct, and deliver on, a big sweeping story. Anyone with a five-dollar intellect can lay out a big story, but it takes mastery to tell it well. When you find yourself on — of all places! — a 2110 golf course with the main characters in Simon Royle’s narrative, totally engrossed in dialogue and story and possibility, and all of it managed with a relaxed hand, you know you are just where you want to be as a reader.

on the big screen:
“Tag has an excellent plot that would translate well to the big screen.  An impressive debut. Highly recommended.”

From a world where the concept of violence has changed, and where personal privacy has been forsaken, comes a tale of conspiracy, love and murder – and the bond shared by brothers.

Why the reviewers all give TAG a 5.0 rating
“Having nothing to hide from each other is the first step to having nothing to fear from each other” – TagImagine a future where privacy is almost non-existent. A future where even your thoughts aren’t safe. It’s the year 2109 and every citizen is required by law “to carry upon their person an electronic device containing the means to broadcast their Personal Unique Identifier (PUI), and authorizes the monitoring of the identity, location, movements and actions of any citizen, without prior cause warranting such monitoring, by satellite or any other means…” But then a new “tag law” is proposed, one where the only difference between it and the old law is that the PUI is to be embedded in the arm.

In a race against time, UNPOL (United Nation Police) arbitrator Jonah Oliver is on a mission to save the lives of 6.3 billion people.

This fast-paced technothriller paints a scenario so plausible, it’s actually quite terrifying. Though action-packed, the relationship between Jonah and Mariko adds quieter moments and balance to this big, multi-dimensional story. The sense of place and time is vivid, yet there are no wasted words.

Tag has an excellent plot that would translate well to the big screen.

Life is irrevocably changed for Arbitrator Jonah Oliver the day he’s called in to work with a mysterious runner, Jibril Muraz, who seems to have no past, and an amazing ability to avoid the potency of the truth treatment. Jonah is not sure why this strange and alien being is asking specifically for Jonah’s services, and things become even less clear when a telepathic message is received directly from Jibril that hints at secrets and betrayal. With little explanation, and much confusion, Jonah is thrown into a race against the clock to stop a terrible plot designed to eliminate two-thirds of the population. All the odds are stacked against him, and he soon finds that his past is not what he thought it was, and his future is even more uncertain.In his first novel, Simon Royle has managed to create a riveting thriller that kept me up much past my bedtime. From the first chapter, I was engaged and eager to discover the secrets of Jonah’s life as they unfolded. The book is set a century in the future, and the world looks much as we may expect; it is different, but somehow exactly the same. In line with the human tendency to shorten words of common objects (think net for internet, phone for telephone, TV for television), some of the important terms of this century include, amongst other terms, dev (device), trav (travel), and cred (credit- monetary units earned by “contributions”). Although common travel has extended to the moon and the world is now united, at least in theory, the people and the experiences are recognizable and definitely feasible. The idea of “tagging” humans with their identity numbers is perhaps not even as far in the future as the timeline chosen for this book. This fictional reality is extremely realistic, and the implications of such a future really demand to be considered.

The characters in this book were interesting and decently developed for a thriller. I may have enjoyed some additional development when it came to some of the relationships, particularly between Jonah and Mariko, to really understand their connections. In a fast-paced storyline like this, however, it really is more secondary to the action, and the action was well done. The writing style was very engaging and readable. I really didn’t find myself rewriting any passages in my head, and that’s always a good thing! The plot was well-paced, and it really compelled me to read the whole way through, especially as I began the last half of the book. The book switches from first person (when Jonah is present) to third person (when we’re with everyone else), and it made me do a quick double take once in a while, but that is probably my fault, as I have a tendency not to read chapter headings, and that is where the time, place, and characters were clearly spelled out.–

Simon Royle was born in Manchester, England in 1963. He has been variously a yachtsman, advertising executive, and a senior management executive in software companies. A futurist and a technologist, he lives in Bangkok, with his wife and two children. TAG

(or a free sample) to your Kindle, iPad, iPhone, iPod Touch, BlackBerry, Android-compatible, PC or Mac and start reading within 60 seconds!
Each day’s list is sponsored by one paid title. We encourage you to support our sponsors and thank you for considering them.
Authors, Publishers, iPad Accessory Manufacturers:
Interested in learning more about sponsorship? Just click on this link for more information.
Free Contemporary Titles in the Kindle Store