The Best “Book Group” Novel Ever

Most afternoons I try to spend 20 to 30 minutes on the elliptical trying to do what I can to forestall implementation of the Kindle Nation corporate succession plan. I don’t get to it every day, but I would be nowhere if it weren’t for the accompaniment provided by my Kindle’s text-to-speech. 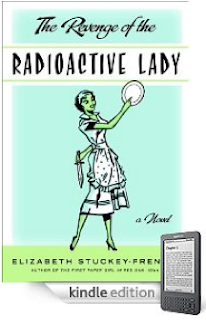 But yesterday afternoon I did 29 minutes and it was bliss. It wasn’t that I was in any better shape than any other day. It was that I was accompanied by my Kindle’s text-to-speech reading me the first chapter of The Revenge of the Radioactive Lady

, a new novel by Elizabeth Stuckey-French.

It is a very funny novel about the very private, quirky lives of its characters, but it is also a public novel about America. It is a women’s novel, but it is also a must-read for men, or at least for those men who read. It is a Southern novel, yet there’s nothing parochial about its sense of place and people. Elizabeth Stuckey-French is a highly regarded author of literary fiction whose short stories have been shortlisted for PEN/O’Henry Prize and Narrative

honors, but she’s written a darkly funny, deeply ironic book that deserves to become a wildly popular novel (and will become that if Amazon figures out the book’s potential and prices it to sell.)

And on the off-chance you want a second opinion, check out Jincy Willett’s February 13 rave review in the New York Times Book Review

But my take? In the same way that it has been said many times that the late great Steve Goodman wrote the perfect “country and western” song, let me be the first to say that — for all the reasons just enumerated and many more — I believe Elizabeth Stuckey-French has written the best “book group” novel ever, and I mean that as the warmest of praise.

For most of the last few decades it has been my unmerited luck to have been personally involved with book group members, and I have conned myself into believing that I know something about book groups. I listen attentively to learn what the selections have been and how they have gone over. And I am going to go out on a limb and say that if you are in a book group, you should lobby hard next Wednesday evening (or whenever) to get your group to select The Revenge of the Radioactive Lady

as its next pick.

Your fellow book group members will love it, and they will love you: for discovering it, bringing it to their attention, introducing them to a talented fiction writer, and getting them laughing and thinking and talking as they haven’t laughed and thought and talked in months.

. They’re all great, but they will keep.

And none of them will Skype live right into your living room to participate in your book group discussion! Elizabeth Stuckey-French will do that. Just email her at esf@elizabethstuckeyfrench.com. Really.

So, this month, choose Elizabeth Stuckey-French

. I promise you’ll be glad you did. Her book is available both in a Kindle edition

and in a hardcover

that Amazon has marked down to just over $15. And there a great set of book group discussion questions on her author website.

Full Disclosure: Elizabeth first appeared on Kindle Nation with her short story “Interview with a Moron” in the very first issue of our Free Kindle Nation Shorts feature back on May 22, 2009. She is not and never has been a Kindle Nation sponsor, and her money’s no good here anyway, because she’s like family to me. She’s not actually family, and I’ve never met her face-to-face, but she’s married to a guy who’s been one of my dearest friends

since I was 20, and we’re also connected by virtue of each of us having “studied with” one of my favorite writers, Francine Prose

: Elizabeth at the prestigious Iowa Writers Workshop and me in Monroe Engel

‘s life-changing English Mb undergraduate fiction workshop back around the time that I met Ned French.