Did *that* Kate read *this* Kate’s totally free take on Royal Wisdom before she strolled down the Abbey’s aisle? Is young Will absolutely ready to say Baby I’m Yours, or is he already imagining that he mind find big love in Mormonism, Mama and Me? We’ve got these freebies and more atop this morning’s latest additions to our 250+ Free Book Alert listings….

“Anyone who recalls a childhood with the freedom to investigate the streets in search of everything unknown will love this story.” –Janie 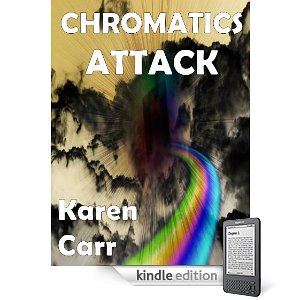 Twelve-year-old Emison prefers reason over impulse, but when her mom turns into a shadow and vanishes through their apartment wall, Emison’s well-ordered reality changes. She embarks upon a journey into a mysterious shadow world, where she encounters an evil gang of color scientists called the Chromatics.

Emison must navigate the strange new world and her own insecurities to rescue her mom from the evil gang. Emison’s plan unravels when she changes into a flat-black shadow, and descends into the pitch-black land of darkness. To succeed in her quest, she must trust her friends and follow her instincts, which have always been wrong.

What the Reviewers Say
“Karen Carr has taken a very unique idea and transformed it into a suspenseful story that you don’t want to put down. The point of view reveals the Chromatics and their world perfectly. The complexities unfold beautifully as the main characters negotiate a new and exciting reality.”
–CYS “Caroline”

‘ is a great story that will keep you wanting to read more! I like this book because I love fantasy books; I think it’s so awesome for this author to make up such a cool world and such a cool book! All kids my age and older would love reading this book. I know I loved it! “
–Reader Reviews


“…Explosive descriptions of a new form of life, a parallel dimension explored for the first time, give the setting sparks and keep you on your toes throughout the well developed storyline. The characters are grounded and reaffirm the ability of man to rise to the occasion and save the day. The adventure is tinged with first crushes and innocent flirtations.”
–Janie

Karen Carr discovered at a young age that she liked to write. It was mostly because of her father, who wrote so much that he could not leave his study without an avalanche of papers following him. In fact, the only piece of furniture in the study was an old leather sofa. The rest of the room was full of books. It was on this sofa that Karen spent many hours honing her craft, even after he was gone. While she has moved from Chicago, to New York, to Los Angeles and beyond, her love of writing has never left her side.

was written after she had a nightmare about strange shadow-people coming out of a giant hole in the wall. The nightmare inspired a new world seen through the eyes of a twelve year old girl and a boy. She has just finished writing a sequel, in which the Chromatics create a color bomb to destroy the shadow world. Her current project, a novel called Heaven’s Fishermen which is about a kid who thinks he is a guardian angel is due to be complete in the summer.

UK CUSTOMERS: Click on the title below to download
Chromatics Attack (The Shadow World)
Each day’s list is sponsored by one paid title. We encourage you to support our sponsors and thank you for considering them.
Authors, Publishers, iPad Accessory Manufacturers:
Interested in learning more about sponsorship? Just click on this link for more information.
Free Contemporary Titles in the Kindle Store