Here are a few books that have just gone free by authors who have already proven to be  favorites with Kindle Nation readers. Please grab them now if they looks interesting to you, because they probably won’t stay free for long!
Important Note: This post is dated Saturday, June 30, 2012, and the titles mentioned here may remain free only until midnight PST tonight. 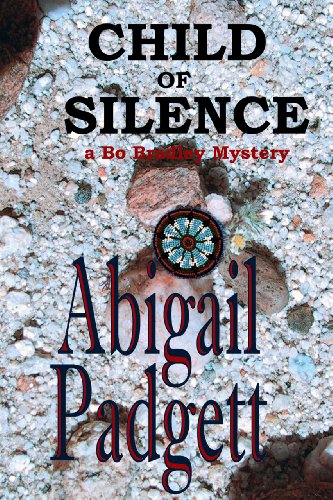 4.7 stars – 20 Reviews
Kindle Price: FREE!
Text-to-Speech and Lending: Enabled
Don’t have a Kindle? Get yours here.
Here’s the set-up:

First in the award-winning Bo Bradley mystery series, CHILD OF SILENCE introduces the much-loved sleuth whose big heart and quirky wit help her deal with both an impossible job and a psychiatric disorder her Irish grandmother called “the sight.” An amateur artist, Bo would rather be painting, but when a child is in danger she risks everything, even her life.

Thirty miles east of San Diego, in the dusty heart of the California high desert, lies the Barona Ranch Indian Reservation. This is desolate country, marked by lone pines, winding canyons, and granite hills. It is here that the boy was found, tied to a mattress in an abandoned mountain shack.

The case is assigned to Bo Bradley, a child abuse investigator with San Diego’s juvenile court system. It is meaningful job, and it pays for Bo’s few indulgences, like her books on Indian lore and the huge canvasses for her paintings, based on ancient Native American rock drawings.

Bo takes her profession seriously, and she abides by its cardinal rule; never get involved with the child-victim. This has not always been easy for a sensitive woman whose emotions ride perilously close to the surface. Now, with this four-year-old boy, it proves impossible.

He is a non-Indian who calls himself Weppo, and he has been classified as mentally impaired, making him a high risk for abuse. But something in Weppo’s intense gleaming gaze strikes a deep chord in Bo. She knows that look. In the eyes of her late, deaf sister, she has seen it before. Weppo is not at all impaired; he is deaf.

Inspired by this new knowledge, Bo sets out to interview the Paiute mystic, the woman they call “Seize the Dark,” who found the boy. Driving along pine scented trails into the Indian country she so loves, Bo feels as if a strange force is leading her onward, an intuition that builds when she meets “Seize the Dark” and the old crone confides that “spirits” led her to Weppo; “I saw the boy with blood on his mouth.”

After visiting the shack, Bo wonders, had the deaf child been tied up because there was no other way of saying “Stay here. I’ll be back”? An inner voice tells her as much. And she knows she must listen, for it also tells her that Weppo is in great danger.

A poisoned-tipped bullet soon proves the point–as two thugs break into the hospital and attempt to murder the boy. Pushed beyond the point of no return and into a dangerous manic state, Bo bends the rules and swings into action.
Risking personal involvement and professional ruin at the hands of her by-the-book supervisor, she vows to unearth the truth surrounding this child of silence. It is a mission that will take her from the ancient sands of the California desert to the gilded mansions of Houston’s political set and back, as Bo Bradley mounts a desperate struggle to save Weppo–and herself–from certain death. 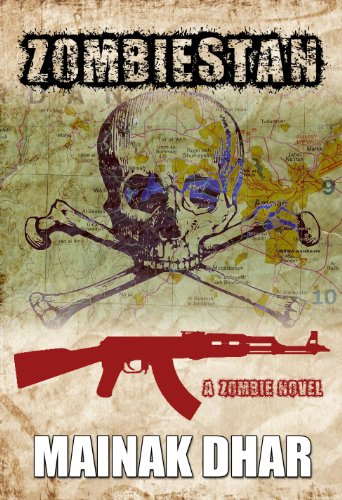 4.1 stars – 68 Reviews
Kindle Price: FREE!
Text-to-Speech and Lending: Enabled
Don’t have a Kindle? Get yours here.
Or check out the Audible.com version of Zombiestan
in its Audible Audio Edition, Unabridged!
Here’s the set-up:

From the author of the sensational Amazon.com bestseller, Alice in Deadland, comes another unique and action packed take on the zombie genre.

It began with stories of undead Taliban rampaging through Afghan villages, and faster than anyone could have anticipated; the darkness spreads through the world.

In a world laid waste by this new terror, four unlikely companions have been thrown together- a seventeen year old boy dealing with the loss of his family, a US Navy SEAL trying to get back home, an aging, lonely writer with nobody to live for, and a young girl trying to keep her three year old brother safe.

When they discover that the smallest amongst them holds the key to removing the scourge that threatens to destroy their world, they begin an epic journey to a rumoured safe zone high in the Himalayas. A journey that will pit them against their own worst fears and the most terrible dangers- both human and undead.

A journey through a wasteland now known as Zombiestan. 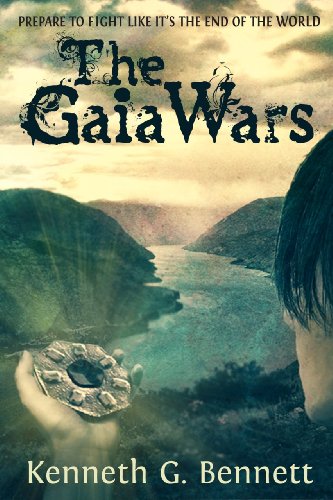 4.4 stars – 50 Reviews
Kindle Price: FREE!
Text-to-Speech and Lending: Enabled
Don’t have a Kindle? Get yours here.
Here’s the set-up:

Deadly secrets have been buried in the Cascade mountain wilderness for centuries. Hidden. Out of sight and out of mind.

Warren Wilkes, age 13, doesn’t like what a greedy housing developer has done to his peaceful mountain community, so he vandalizes the developer’s property, flees into the wild, and stumbles upon an ancient human skeleton revealed by torrential rain. More than old bones have been exposed, however, and the curious artifact Warren finds makes him question his own identity, and his connection to an ancient terror. A terror destined to rise again and annihilate all that Warren loves. He must fight or see his whole world destroyed. 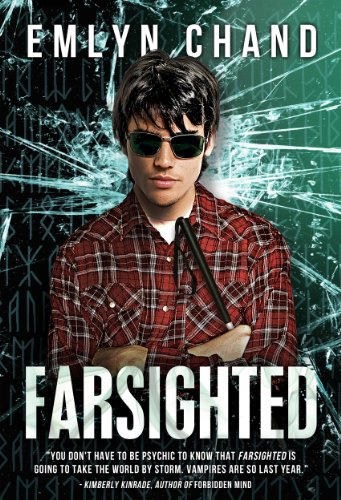 4.2 stars – 163 Reviews
Kindle Price: FREE!
Text-to-Speech and Lending: Enabled
Don’t have a Kindle? Get yours here.
Here’s the set-up:

lex Kosmitoras’s life has never been easy. The only other student who will talk to him is the school bully, his parents are dead broke and insanely overprotective, and to complicate matters even more, he’s blind. Just when he thinks he’ll never have a shot at a normal life, an enticing new girl comes to their small Midwest town all the way from India. Simmi is smart, nice, and actually wants to be friends with Alex. Plus she smells like an Almond Joy bar. Sophomore year might not be so bad after all.

Unfortunately, Alex is in store for another new arrival–an unexpected and often embarrassing ability to “see” the future. Try as he may, Alex is unable to ignore his visions, especially when they suggest Simmi is in mortal danger. With the help of the mysterious psychic next door and friends who come bearing gifts of their own, Alex embarks on his journey to change the future.

SLAVE SPY – The Youth and Times of Lazarus Perlman 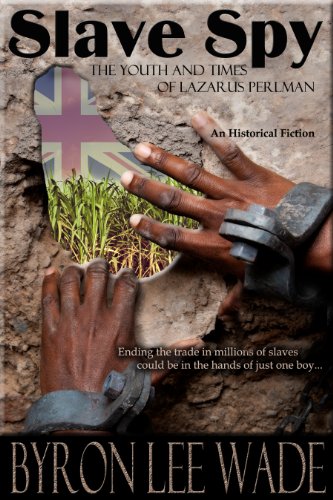 SLAVE SPY – The Youth and Times of Lazarus Perlman
by Byron Lee Wade
5.0 stars – 1 Reviews
Kindle Price: FREE!
Text-to-Speech and Lending: Enabled
Don’t have a Kindle? Get yours here.
Here’s the set-up:
Ending the trade in millions of slaves could be in the hands of just one boy . . .
* * * * * * *
In the late 18th century, Lazarus Perlman, a motherless Jewish boy is raised by a tradition-bound father and mentored at London’s famed Jews’ Free School. Debating the issues of the day at the King Solomon Club – he encounters Thomas Clarkson, the heartbeat of the campaign to end the British trade in African slaves.
Keenly aware that he is a descendant of slaves, Lazarus joins the effort as aide to Clarkson and the Abolition Society gains the upper hand . . . until the ruthless West Indies sugar lobby convinces Parliament that evidence of cruelty to slaves is exaggerated and stale. The abolitionists need fresh evidence, but their leading informant in the West Indies has been murdered – and the abolitionists face defeat unless somebody can provide intelligence from the scene.
Disguised as a tailor, Lazarus sails to Barbados to spy on slave masters . . . to end the slave trade and save the slaves. But his adventure proves more perilous than anyone had thought. Now the question becomes . . . who will save Lazarus Perlman . . . and how?
* * * * * * *
Set against the rich background of the British abolition movement – which spawned Amazing Grace – this ambitious historical fiction takes a fresh look at two peoples, Africans and Jews, and their common legacy . . . slavery and oppression. Peopled with unforgettable characters and paced with stark conflicts, it spins a captivating, uniquely original and timeless tale – and posts reminders for every generation. 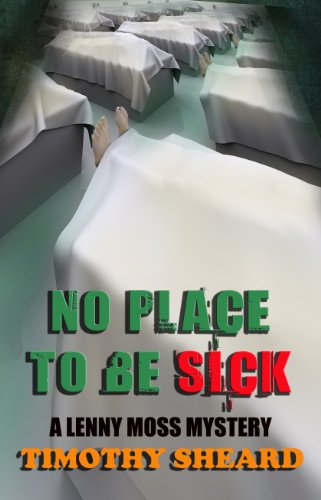 5.0 stars – 1 Reviews
Kindle Price: FREE!
Text-to-Speech and Lending: Enabled
Don’t have a Kindle? Get yours here.
Here’s the set-up:
The nurses at James Madison Hospital are afraid…
Too many of their patients are dying from unexpected cardiac arrests. The nurses fear that a serial killer could be roaming the hospital. But when they share their suspicions with the Director of Nursing, she orders them to keep their mouths shut or they will be fired. So the nurses turn for help to Lenny Moss – custodian, shop steward and…Detective!But Lenny has problems of his own. His last murder investigation nearly killed him. The post traumatic stress from a brutal attack has our union champion turning away from his friends, his family and his passion for the fight for justice. Even the threat from a merciless hedge fund CEO to buy the hospital, turn it private and kick out the union hasn’t roused Lenny to join the struggle. Feeling beaten and hopeless, he just wants to be left alone to do his job.Will the murderer keep on killing? Will Lenny turn his back on his friends and family and the union he’s devoted his life to serving?
Find out in the exciting new Lenny Moss crime novel, No Place To Be Sick. 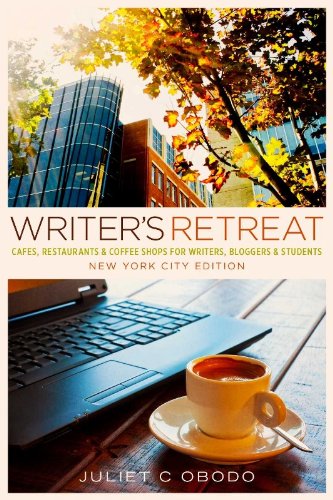 When living in a busy city or traveling to one it’s often difficult to find a place where you’re able to tap into your right brain’s creativity. The Writer’s Retreat Inspirational Travel Guide series lists the best independent eateries in your area or vacation destination. It has a selection of the best cafes, restaurants and coffee shops for writers, bloggers and students.

The locations are loiterer friendly with great food, coffee and staff. The New York City edition has over 100 cafes listed according to the neighborhoods in Manhattan, Brooklyn, The Bronx, Queens and Staten Island. A collection of Inspirational Itineraries that take you to landmarks not often found in other guide books are also included to aid in ridding you of that pesky writer’s block.