Amazon’s Share Price Soars, and So Does the Kindeal!

It’s been quite a week for Amazon and the Kindle.

On Tuesday the company announced its quarterly earnings, which the pundits said “disappointed the market,” because, despite record-setting top-line sales and growth not seen since the dot-com boom, the company chose to invest heavily in innovations and fulfillment infrastructure aimed at generating even greater sales in the future. 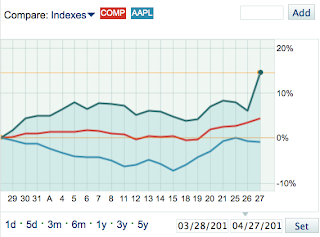 How did the market disappointment play out? For about 15 minutes — roughly the attention span of most day traders — Amazon shares fell sharply in Tuesday’s after-hours trading. The AMZN share price then proceeded to regain nearly all of the initial loss, and when the market opened Wednesday morning the stock soared to close at a new all-time high of $196.63, up nearly 15% since the launch of the Amazon Cloud Drive on March 28 and about 150% since the launch of the Kindle in November 2007.

Speaking of the Kindle, as we tend to do here, something else that made this a big week for Amazon is that the company outdelivered this week on its initial promise to ship the new $114 KINDEAL (as we like calling the Kindle with Special Offers

) by May 3. Amazon started shipping the KinDeal yesterday, and mine arrived here in Arlington today.

I like it, and I can say that, so far at least, the “deals” and “sponsored screensavers” are unintrusive and have absolutely no effect on the Kindle reading experience as I have been enjoying it for over three years now. In terms of the reading experience, there is no difference.

I have seen four deals so far, mainly because I have made a point of searching them out. I have seen three separate sponsored screen savers, and they are certainly as easy on the eyes as John Steinbeck. I have not purchased a Buick or an Olay product, but I did click to have one of the two VISA offers emailed to me. As a result I will receive a $10 Amazon promotional credit will be applied my Amazon account after I make a VISA card my default 1-click payment method and purchase one of 48 qualifying, and generally appealing, Kindle books associated with the offer. Only one of the 48 books, when I checked, was priced above $9.99, and over half were priced below $8.

I will be buying a book that I had already intended to buy — probably A Confederacy of Dunces by John Kennedy Toole for $7.92 — so, depending on how you look at it, along with the $25 reduction in the Kindeal price compared with $139 wi-fi Kindle, I’m up either $27.08 or $35 since my Kindeal arrived four hours ago.

As I’ve said before, it’s not for everyone. But so far at least, it’s definitely for me, and for a lot of other smart people.

The way I see it, it has been a pretty good week for Kindle. And I will have a post later on about something else that Amazon has done that (a) is very smart, (b) proves that the company can walk and chew gum, figuratively speaking, at the same time, and (c) could put an extra 25 bucks in yo’ Mama’s pocketbook next week. Or, for that matter, in yours!