What a great mix of three very different titles in today’s latest additions to our Free Book Alert listings in the Kindle Store. I’m guessing that there will be very few Kindle Nation citizens who won’t want to add at least one of these to our Kindle libraries…. 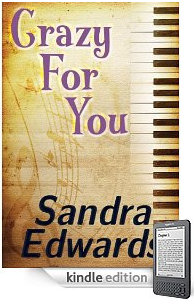 , a rags to riches tale set against the backdrop of the 80s, movie stars and rock-n-roll, is already a 5-star contemporary romance bestseller in the Kindle Store at the sweet price of 99 cents. Here’s the set-up:

Roxanne Simon is a successful author and an award-winning actress who’s also a bit neurotic. After she appears on a popular talk show the world is left guessing: is rock star Frank Garrett the father of her four year old son? Now that Roxanne’s carefully guarded secrets are starting to unravel, Frank stumbles upon some damaging information that he decides to use against Roxanne—but is he prepared to see her pay the ultimate price in his quest for revenge?

Click here to download Crazy For You or a free sample) to your Kindle, iPad, iPhone, iPod Touch, BlackBerry, Android-compatible, PC or Mac and start reading within 60 seconds!

(Sponsorship can take a number of different forms and implies no endorsement either of or by Kindle Nation or a sponsoring company or individual.)

Free Listings in the US Kindle Store!
(For our UK Kindle Free Book Alerts click here.)

Winners Never Cheat: Even in Difficult Times, New and Expanded Edition by Jon R. Huntsman
The nationwide bestseller–fully updated for today’s tough times and worldwide financial crises
“Everyone does it.” Everyone cheats. Cuts corners. Tells lies. Maybe it was different once. Not today. If you want to succeed in this economic climate, you simply have to make compromises. Right?
Wrong. You can succeed at the highest levels, without sacrificing the principles that make life worth living. The proof? You’re holding it.
Jon M. Huntsman built a $12 billion company from scratch, the old-fashioned way: with integrity. There were short-term costs and difficult decisions. There were tough times. Times just like today. But ultimately, leading with integrity wasn’t just personally right for Huntsman, it also proved to be the best business strategy.
In Winners Never Cheat, Huntsman tells you how he did it, and how you can, too. This book is about remembering why you work, and why you were chosen to lead. It’s about finding the bravery to act on what you know is right, no matter what you’re up against.
It’s about winning. The right way.
Think about the kind of person you want to do business with. Then, be that person–and use this book to get you there.
Author royalties from this book go to the Huntsman Cancer Foundation

Lessons From A Younger Lover by Zuri Day – Steamy Romance from Kensington Books
Zuri Day cranks up the heat with an explosively sexy tale about a woman who’s about to get a crash course in lust. . .
First grade teacher Gwen Smith was happily married–until her husband got himself a twenty-something mistress and filed for divorce. Now just months away from turning forty-one, Gwen is back in her tiny California hometown, caring for her ailing mother, convinced her life is over. Then she meets Ransom Blake.
Ransom is a twenty-six-year-old hunk who pushes every one of Gwen’s buttons. Gwen has no intention of getting involved with a younger man, but he won’t take no for an answer. So when he shows up at her classroom unannounced, Gwen can’t help but tell him off–and then she realizes he’s come for his daughter. But Ransom isn’t shy about letting Gwen know how she can make it up to him. And if he gets his way, Gwen will lose all her inhibitions–and her heart…

It Takes a Genome: How a Clash Between Our Genes and Modern Life is Making Us Sick

Human beings have astonishing genetic vulnerabilities. More than half of us will die from complex diseases that trace directly to those vulnerabilities, and the modern world we’ve created places us at unprecedented risk from them. In It Takes a Genome, Greg Gibson posits a revolutionary new hypothesis: Our genome is out of equilibrium, both with itself and its environment. Simply put, our genes aren’t coping well with modern culture. Our bodies were never designed to subsist on fat and sugary foods; our immune systems weren’t designed for today’s clean, bland environments; our minds weren’t designed to process hard-edged, artificial electronic inputs from dawn ‘til midnight. And that’s why so many of us suffer from chronic diseases that barely touched our ancestors.
Gibson begins by revealing the stunningly complex ways in which multiple genes cooperate and interact to shape our bodies and influence our behaviors. Then, drawing on the very latest science, he explains the genetic “mismatches” that increasingly lead to cancer, diabetes, inflammatory and infectious diseases, AIDS, depression, and senility.

Billy Boyle is a Boston cop, from a family of Boston cops, but he is a reluctant soldier who prefers walking the beat in Southie to fighting Nazis. Using her cousin by marriage, a certain General Eisenhower, Billy’s mother lands her son a seemingly soft job with Ike’s staff in London. But Ike wants Billy to use his investigative know-how to sniff out a possible spy in the Allies’ inner circle. Young Billy, oversold by his mother as a crackerjack detective, is definitely in over his head, especially when it turns out that the apparent suicide of a Norwegian dignitary may have been the work of the spy. Benn has a tantalizing premise here, but he doesn’t quite deliver on it: his prose slips into wartime cliches a little too often, and the supporting love story reeks of WWII melodrama. Yet the action builds to a suspenseful climax, and there is even a hint of moral ambiguity in the wrap-up. A not entirely satisfactory debut, then, but Ken Follett fans will want to give Billy and his uncle a chance to develop. —Bill Ott, Booklist

Click here to see all Free Titles in the Kindle Store!

The Other Side of the Page – Romance Short – Terry Odell

Here’s the author’s description: “Finding the perfect hero and heroine for a romance novel can turn a writer’s hair gray–that’s why I advertise for them. Interviewing characters can be exhausting, and getting them to stick to the plot? Well, it doesn’t always work that way. And then you find out they’re talking about you behind your back–Meet Randy and Sarah, the hero and heroine of Finding Sarah and Hidden Fire, in a funny and illuminating look at what goes on behind the scenes of the romance writing process.” Sounds a little meta, but lots of fun.

I Thought It Was You: Grimm’s Circle, Book 2.5 – Romance Short Story – Shiloh Walker

More Blood, More Sweat and Another Cup of Tea – Memoir