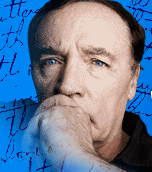 Amazon.com announced Friday that James Patterson, the ultra-prolific author of over 65 books crossing many genres, is the second member — and the first living member — of what the company calls the Kindle Million Club.

Widely believed to be the world’s bestselling author, Patterson follows the late Stieg Larsson by almost exactly three months in garnering the distinction of having sold over 1 million ebooks in the Kindle Store. (Scroll down for our July 27 piece of Larsson’s achievement)
Patterson’s books cover the bookstore with titles in these categories: Suspense, fantasy, romance, historical fiction, and children’s.
Patterson critics like horror meister Stephen King snipe that Patterson couldn’t be carried in the “Literary” aisle.  Patterson responds by describing himself as a story teller, and points to millions of book sales as proof positive he’s got something good going on. 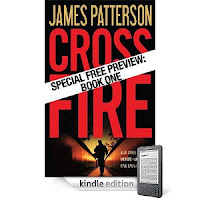 What he has going on right now is a new book featuring his popular character Alex Cross. Cross Fire, the full ebook novel, is available for pre-order at Amazon for delivery on November 15.
Another pre-order, acting as herald to the pricey Cross Fire, is Cross Fire-Free Preview: The First 30 Chapters. It’s free, will electronically appear on Nov. 1, and is published by Hachette Book Group.  Hachette is listed as setting the $ 0.00 preview price and mandating the “agency model” price tag of $14.99 for the ebook. Compare that to the hardcover price on the Amazon page for the book, now showing at $15.12.
On the hardcover book page—only–on Amazon (as of today), Patterson speaks to the online reader from a posted video. He sits in a comfy looking study, books lining the walls.  Questions appear on a black screen in white letters, then the video cuts to Patterson answering. Don’t rush off when the author finishes the answer, because more questions and responses follow.
Once more stepping into the free-fire between authors, publishers and ebook readers infuriated by a price anywhere over $9.99, the book is sure to intensify the “what’s an ebook worth?” battle.
According to the sticker prices currently on the ebook and the hardcover, listed on Amazon at $15.11 for the hardcover and $14.99 for the ebook, apparently Hachette and potentially the author think an ebook is worth 12 cents less than a printed book sandwiched between fancy covers, run through printing presses, stacked and warehoused and trucked and carried to bookshelves or delivered by human hands to readers’ doors.
Over his 33 year writing career, Patterson has published more than 65 books, an average of 2 a year. Recent years have seen the pace of his output soar. It’s not uncommon to see a Patterson book and soon after a different “Patterson And” book where he’s teamed up with writes like Andrew Gross or Maxine Paetro.
Despite the furor over the comparative price of the ebook and the print book, if they remain the same, Cross Fire makes for an interesting field test of book pricing.  At virtually the same price–what can 12 cents get you?–it comes down to which a reader prefers because of varied issues:  the environment (save a tree), weight (just under a pound at 14.4 ounces), landed cost (add $3 for minimum cost of delivery in the US), sensual (a hardcover’s distinctive feel and smell), wrap-ability (an ebook isn’t amenable to shiny Christmas paper), share-ability (Amazon is changing that), and myriad other issues close to the hearts of readers.

Here’s a link to Amazon’s press release, and here’s our earlier post noting Stieg Larsson’s posthumous anointment as the first member of the Kindle Million Club:

Following on items discussed here at Kindle Nation Daily on June 3 and July 16, Amazon announced this morning that the late Stieg Larsson has become the first author to sell a million paid Kindle books. Larsson is The Beatles of eBooks, as the three books in his trilogy currently rank 1-2-3 among paid titles in the Kindle Store and arer all among the top 10 bestselling titles ever in the Kindle Store:

On July 16, I posted an article entitled Move Over, James Patterson … actually, Stieg Larsson Was the First Author to Sell a Million eBooks. I later backed off the exact figure because of information that I received from a reliable source in the publishing industry. Apparently Larsson’s sales were very close to a million total ebooks as of July 6, but have now passed a million Kindle ebooks ahead of any other author, which suggests two other general trends:

It’s not a surprise that the latter is true, given that (1) the iBooks store does not stock Larsson or any other Random House author; and (2) for all of the attention paid to other dedicated ebook readers in the media, there is little sign that the Nook, or the various Sony products, or any other dedicated ebook readers have gained any real market traction beyond the lowest double digits.

The realities of Kindle content market share (among all ebooks) — 90 percent as of late 2009 according to publishing industry insiders, 76 per cent for James Patterson, 80 to 85 per cent for Larsson, and 100 percent among the tens of thousands of titles carried only in the Kindle Store — makes somewhat more vivid the recent controversies surrounding change in the publishing world.

“Larsson’s books have captivated millions of readers around the world and ignited a voracious interest in the lives of its main characters Lisbeth Salander and Michael Blomqvist,” said Russ Grandinetti, Vice President of Kindle Content. “It’s been exciting to have been a part of introducing so many people to these great books.”

The books in Larsson’s Millennium Trilogy are available in the Kindle Store. Kindle offers the largest selection of the most popular books people want to read. The U.S. Kindle Store now has more than 630,000 books, including New Releases and 109 of 111 New York TimesBestsellers. Over 510,000 of these books are $9.99 or less, including 80 New York Times Bestsellers. Over 1.8 million free, out-of-copyright, pre-1923 books are also available to read on Kindle.