By KND on February 25, 2011 in ebook of the day
Loved The Da Vinci Code and The Lost Symbol

, but you wish Dan Brown could lose his fixation with all the arty esoterica? Terrence O’Brien’s The Templar Concordat could be the book that hits your sweet spot….
Here’s the set-up: 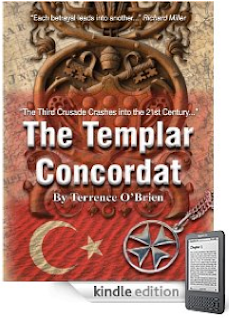 When the truth is your greatest danger, and the enemy knows the truth, things can only go downhill when the enemy finally gets the proof. And that’s the proof the Hashashin get when they steal what the Vatican doesn’t even know it has.

Now the infallible decrees of two Twelfth Century popes and three kings, stolen by the Hashashin, threaten to catapult the bigotry, bias, and religious blood baths of the Third Crusade straight into the Twenty-First Century.
When Templars Sean Callahan and Marie Curtis are drawn into the mess, they face an ancient enemy that has already nearly won the battle, a newly elected Mexican pope being undermined by entrenched Vatican powers, world class scholars who will sell their prestige to the highest bidder, and terrorists lingering over lattes in sidewalk cafes.
Moving from Rome to London, Switzerland, and Saudi Arabia, Callahan and Curtis are desperate to find some way to stem the success the Hashashin are having enlisting the majority of moderate Muslims in their Jihad.
Outmanuevered at each step by the Hashashin, only a last ditch roll of the dice has any chance of success. But it’s the only chance they have.
The Templar Concordat

by Terrence OBrien
5.0 out of 5 stars – 5 Reviews
Kindle Price:     $2.99
Text-to-Speech: Enabled
Lending: Enabled
Right here, in the comfort of your own browser, is your free sample:

kindle for the web, templar concordat