This just in from author Richard Bard:

Doesn’t matter what we call it — it’s just a great deal to make sure that everyone has a chance to read both books in this great emerging series from one of the most successful indie authors of 2011 … and now, 2012:

That’s right. Buy Brainrush II, The Enemy of My Enemy, and you can receive a FREE Kindle copy of Richard Bard’s bestseller Brainrush I, a Thriller.

Go to http://richardbard.com/promo/ for all the details! 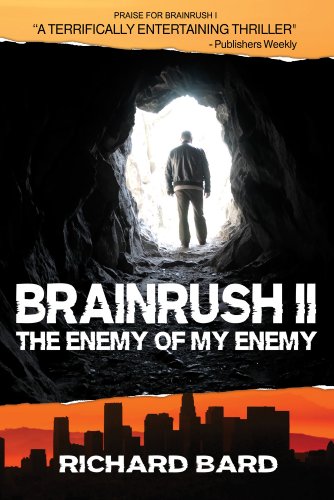 Don’t have a Kindle? Get yours here.
Here’s the set-up:

This is Book-2 of the highly-acclaimed bestselling series. It is recommended you read Book-1 first. On sale now for only 99 cents, or borrow it for free in the Kindle Lending Library.

Praise for Brainrush, a Thriller (Book I):

*Publishers Weekly review based on the unpublished manuscript.

Former combat pilot Jake Bronson believed the worst was behind him. But when a sophisticated terrorist cell shows up in his home town, he’s drawn into a conflict that threatens the heart and soul of every mother in America. The bonds of love and loyalty are tested as Jake and his friends are swept into a deadly chase that takes them from the beaches of California, to the depths of the world’s longest underground river, and finally to the remote jungles of the Venezuelan rain forest—where Jake discovers that it will take far more than his enhanced abilities to prevent what is coming.

In 1976 young Air Force pilot Richard Bard was diagnosed with cancer and learned that he had only a few months to live. Thirty-six years later he’s still going strong. Now he writes about second chances in the Brainrush thriller series. He currently resides with his wonderful wife in Redondo Beach, California.  “BRAINRUSH II, The Enemy of My Enemy” is the second book of the series. For more information visit RichardBard.com.

Kindle Nation Daily Bargain Book Alert: Kailin Gow’s DAUGHTERS OF DRACULA is Our eBook of the Day at just 99 Cents, With 4.4 Stars on 8 Reviews, and Here’s a Free Sample!
Heads Up! Hours Left to Enter This Week’s Brand New KINDLE FIRE Giveaway Sweepstakes, Sponsored by Donna McDonald, author of Created In Fire