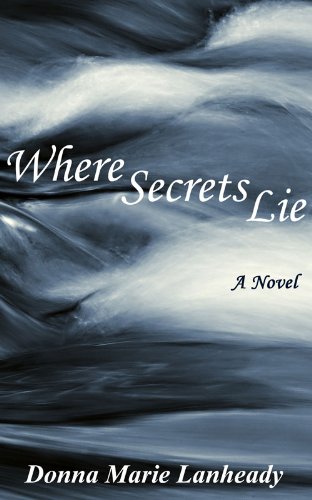 3.4 stars – 14 Reviews
Kindle Price: 99 cents
Text-to-Speech and Lending: Enabled
Don’t have a Kindle? Get yours here.
Here’s the set-up:

Where Secrets Lie is an exploration of one family’s reliance on secrets, how those secrets affect their relationships and alter the directions their lives take, and where those secrets all began.

Sara is the older of two sisters. Her marriage is in trouble, and she only has herself to blame. Everyday Sara takes a birth control pill even though she and her husband, David, are trying to have a baby. When David finds the pills and confronts her with them, Sara must face her own unresolved guilt about a pregnancy David knows nothing about.

Katie is Sara’s younger sister. Her girlfriend, Emily, is tired of pretending they are just roommates whenever they are around Katie’s parents. After all, they are candid about living together as a couple with everyone else. Enough is enough. Problem is, Katie cannot muster up enough courage to defy her mother’s behavioral boundaries. That is, at least, not openly.

Sara and Katie’s mother, Lee, spends her life deploying secrets in order to protect her loved ones not only from difficult truths, but also from the prejudices they elicit. In spite of the torment her own secret laden past causes her, Lee raises her daughters to repress inconvenient truths.

Set in Colorado, Where Secrets Lie shifts between the unique foothills community of Boulder, the mile high city of Denver, and the majestic Rocky Mountains as it moves from the sisters’ stories to their mother’s story weaving them all together and merging each woman’s past with her present circumstances.

I enjoyed this easy to read book. The characters were interesting, each with their own voice. They all had secrets that proved to be destructive in their relationships with others as well as how they saw themselves. It’s thought provoking to realize how we all deal with the secrets in our lives whether they’re big or small – -and how that affects our growth as people. The secrets these character had were serious ones – – but even the smallest ones can affect us.
– Amazon Reviewer

My novel, WHERE SECRETS LIE, is an exploration of one family’s reliance on secrets, how those secrets affect their relationships and alter the directions their lives take, and where those secrets all began.

My next novel, WHOEVER YOU ARE, is a stand alone story, but it features the main characters from WHERE SECRETS LIE and provides insights into how their lives progress.