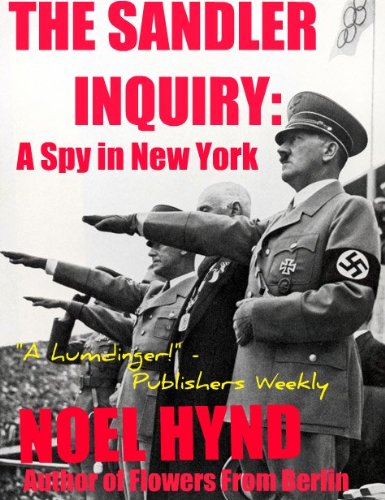 The Sandler Inquiry: A Spy in New York

by Noel Hynd
4.3 stars – 3 Reviews
Kindle Price: $3.09
Text-to-Speech and Lending: Enabled
Don’t have a Kindle? Get yours here.

Noel Hynd knows the ins and outs of Washington’s agencies both public and secret. – Publishers Weekly

A deadly and elusive man. A young woman seeking justice and retribution. A thirty-year-old secret from World War Two. A latter day showdown among British, American, and Soviet intelligence services.

Who was Karl Sandler? Wartime patriot? Or a ruthless and amoral monster who put his vast financial machine behind the highest bidder? Leslie McAdam calls him by another name: her father.

Based on a shocking and shameful episode in history that threatened to alter the course of the world’s economic future, The Sandler Inquiry tells a gripping and unforgettable story of espionage and intrigue, loyalty and love, set in the sprawling ragged violence-prone New York City of the 1970’s.

Determined to claim her rightful inheritance — and to uncover the shrouded past of the man she knew as her father — Leslie has come to Thomas Daniels, a New York attorney haunted by his own bloodstained family history. Yet not even Daniels can imagine what lies beneath decades-old secrets when he launches an inquiry into his client’s murky past. As he moves through the twisting labyrinth of the world’s intelligence community, he uncovers a monstrous link between the man who called himself Karl Sandler and a conspiracy reaching to the highest levels of government…in three countries. From America to Europe to Soviet Russia, he pursues a cold trail that is suddenly red-hot, as the violence of the past lives again and Daniels is stalked by a deadly adversary who must keep the truth buried at all costs.

Now available in a brand-new Amazon Kindle edition, it is a classic novel of World War II and its chilling aftermath from Noel Hynd, the author of FLOWERS FROM BERLIN.

From the reviewers:
..
“A HUMDINGER! Incredible tension, byzantine plotting, fascinating people. Keeps you off balance and guessing all the way. How it all works out is enthralling and chilling.” – Publishers Weekly.

“Fast moving, intriguing and very readable, this spy mystery gets its impact from its intricate plot and complex characterization. For those who revel in suspicious characters, sinister happenings and baffling mystery, Noel Hynd’s latest novel is a delight.” – The Christian Science Monitor.

“Noel Hynd had you glued to the last page! – Boston Globe

“Fast-paced and extremely well plotted…espionage, murder and romance are all intertwined in this up to the minute thriller… Keeps the reader on the edge of his seat!” – The Mirror Magazine (London)

“Hynd is a few notches above the Ludlums and Clancys of the world.” – Booklist