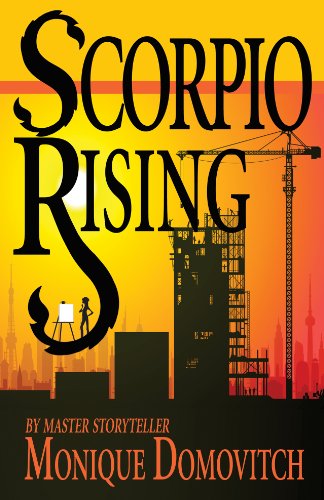 by Monique Domovitch
4.5 stars – 25 Reviews
Kindle Price: $5.99
Or Currently FREE for Amazon Prime Members Via the Kindle Lending Library
Text-to-Speech and Lending: Enabled
Don’t have a Kindle? Get yours here.

Set in New York and Paris amid the glamorous and competitive worlds of art and real estate, Scorpio Rising takes the reader from the late 1940s to the 1960s through the tumultuous lives of its heroes.

There is Alex Ivanov, the son of a Russian immigrant and part-time prostitute. He yearns to escape his sordid life and achieve fame and fortune. His dreams of becoming a world-class builder are met with countless obstacles, yet he perseveres in the hope of someday receiving the recognition he craves.

Half a world away, Brigitte Dartois is an abused teenager who runs into the arms of a benefactor with an agenda all his own. When she finds out that her boss has an ulterior motive, she flees again, determined to earn her living through her art. This career brings her fame, but also the unwanted attention of her early abuser.

Monique Domovitch’s debut novel, Scorpio Rising, is a compelling tale filled with finely etched characters and a superb understanding of the power of ambition. Scorpio Rising promises to resonate with all who once had a dream.
Reviewed by Anne B. for Readers Favorite:

I found this book quite enticing and very difficult to put down. In fact I read it in one morning. The lead characters Brigitte and Alex are quite captivating and work well together. Domovitch is a master of characterization, even developing the cast of secondary characters. This would make a great movie. This plot has it all drama dealing with life in general, greed, and deception. This book plays on the readers emotions, with an ending that leaves the reader ready to jump into the sequel. If you enjoy a good drama, this is the book for you.

Even as a young man during the early 1950’s, Alex Ivanov’s is determined to leave his life of poverty and become rich. He soon finds, however, that in order to achieve his dreams he must make some sacrifices. Thousands of miles away, in Paris, beautiful Brigitte Dartois escapes from her abusive childhood and struggles to make it on her own. But when fame comes knocking, it also brings dangers from the past.
Some people have ambitions so great that they will trample on anything and anyone to achieve it. Born in Brooklyn from an embittered mother, Alexander Ivanov climbs his way to a better life in New York. Thousands of miles away, beautiful Brigitte Dartois also has big dreams and raging ambitions. Scorpio Rising is an American saga, the story of two people whose single-minded obsessions are put to the test when they meet.