Need An Escape? Readers Are Raving About Kate Metz’s Romantic Comedy STILETTO SAFARI – 4.9 Stars on Amazon With 17 out of 17 Rave Reviews and Now Just $2.99 on Kindle!

Stiletto Safari by Kate Metz is a full filled, romantic comedy – who doesn’t need to escape… 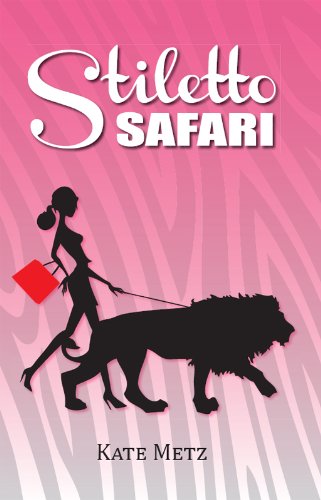 “Are you looking for some fun chick-lit that will hook you at page one and hold you all the way through until the very last page? Then I highly recommend STILETTO SAFARI by debut author, Kate Metz.”- Cindy Roesel, Chick Lit Central: The Blog!

And Cindy isn’t the only one raving about Stiletto Safari. With a 5 star average rating here’s what readers have been saying:

“I found STILETTO SAFARI absolutely delightful… this book was so much fun that I had a hard time putting it down. I would highly recommend it to anyone looking for a fun, light read with a sassy, quick-witted main character.” – Sara Palacios, ChickLitPlus

“STILETTO SAFARI is a humorous and hard to put down read, very much recommended.” – Midwest Book Review

“FUN BOOK ALERT! Check out STILETTO SAFARI by Kate Metz this weekend to help spruce up your Spring Break.” – Liz Fenton, Chick Lit Is Not Dead

“If big game and legal angst seem like an intriguing combination, you should snap up a copy of Metz’s book.” – Roll on Friday

Zara Hamilton has it all – a glamorous New York lifestyle, a gorgeous (and seriously rich) boyfriend, and a job as a lawyer in a prestigious city law firm. But Zara’s fabulous life abruptly ends when her boyfriend is accused of insider trading. Thrown out of work by security and stalked by the press, Zara’s life can’t get any worse. Or can it? A snap decision (and a few wines too many) sees Zara fleeing to Africa to work as a temporary wildlife volunteer.

In the heart of Africa, Zara struggles to accept her new life and yearns for the high glitz and glamour of her old one.  Over-packed, over-dressed and over-stressed she wants to leave as soon as she arrives. Despite her feelings, she promises to stay for at least a month. Just as she settles in her new routine however, she realizes her troubles have only just begun.

Against her better judgment, Zara falls for Hamish, a drop-dead gorgeous wildlife biologist. But when Hamish’s ex-girlfriend turns up with a Vogue crew in tow disaster ensues.

Will Zara’s designer wardrobe survive? Will a supermodel ruin her only chance at happiness?
Can a Birkin bag really solve her problems? And will Zara want her old life back at the end of it all…

Kate Metz lives in Melbourne, Australia with her husband, son and pampered pooch. She has travelled widely and has spent time working as a wildlife volunteer in Namibia. She has been attacked by a leopard, gone swimming with baboons and elephants, electrocuted herself while feeding lions, taught in a bush school, nursed an injured cheetah and has had plenty of other wonderful experiences along the way. Stiletto Safari is Kate’s first novel. When she is not writing fiction she works as a lawyer.