What Happens in Vegas…Stays in Vegas. Right? Elena Aitken’s Contemporary Romance Nothing Stays In Vegas – A Single Night Can Change Your Life Forever – 62 Rave Reviews & Just $3.99 on Kindle **PLUS A Link to Enter This Week’s Kindle Fire HD Giveaway Sweepstakes

Nothing Stays In Vegas 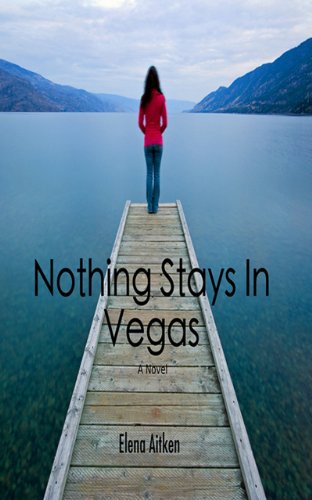 Lexi Titan has mastered the art of pretending everything’s fine. After all, how else could she ignore the fact that her husband is never home, her son barely knows him and the last time she had sex, well, who can remember? With her life crumbling, the last thing she wants to do is go on a trip, especially back to Vegas; a city full of glitz, excess, and Leo, the man she’s spent the last six years trying to forget. But when her best friend announces she’s getting married, Lexi doesn’t have a choice. Besides, it’s ridiculous to avoid an entire city because of one guy. Even if he is the father of your child.

Face to face with memories of the past and the gorgeous man who started it all, Lexi can no longer deny the truth to anyone, especially Leo. But honesty will come at a price, and Lexi must decide if she’s wiling to take that risk. And what exactly will she tell her husband? Because as she now knows, NOTHING STAYS IN VEGAS.

“Turn off that phone, Find that comfy spot, a big cuppa and a place in the sun for this wonderfully refreshing novel. A story of love, chemistry, destiny and the unexpected stories these elements can bring into our lives. The characters were very relatable. Such a refreshing angle for the story to be explored via the two main characters. A romantic novel that didn’t make me squirm, just eager to find out what was going to happen next! Is it a happy ever after? You’ll have to read to find out. I can say you won’t be disappointed.” ~Julie-Anne Adams

“Elena Aitken has brought us such an incredibly sweet story of love almost lost. She breathes such freshness into the story, creating characters I could easily relate to. The story flowed so easily, I lost myself in the events as they unfolded. This had me looking for flights into Vegas! I highly recommend this if you are looking for a light, fun summer read (or any season for that matter!)” ~Diana Murdock

Las Vegas has a reputation for being a city of sin and excess. A place where misbehavior is not only permitted, but often encouraged. Because after all, What happens in Vegas…Stays in Vegas. Right?

After a recent trip to Sin City of my own, I started thinking about what would happen if a ‘good girl’ let loose a little and let down her guard. What if by allowing herself to take a chance, she met someone who changed her life? And what if… Nothing Stays in Vegas after all?

I hope you enjoy Lexi’s story of love and discovery in this story that begins in the most unexpected place and ends in the beautiful Rocky Mountains of Canada.
~Elena

In no particular order, I am: a writer, a mother of twins, a swimmer, a wife, a volunteer, a runner, a friend, a triathlete, a daughter, a sister, a

Brownie leader (recently retired), an auntie, a cyclist, employee and…

I’m trying to do it all and have it all because nobody said I couldn’t. And even if they did, I probably wouldn’t listen because I’m too busy.

I’ve been writing in one form or another since elementary school but although I always knew I wanted to be a writer when I grew up, instead I earned university degrees in Marketing and Psychology and writing got put on the back burner. After my twins were born I was buried in diaper changes, middle of the night feedings and mountains of laundry, so obviously it seemed like a logical time to start writing again. I guess it took me while to grow up.

I turned to non-fiction and became a regular contributor to local parenting magazines, published in four Chicken Soup for the Soul anthologies, and a compilation by Seal Press. It wasn’t until 2005 that I tried my hand at writing fiction and wrote my first novel (at least since I was a kid). It’s buried on my hard drive where it should be! I’ve since written three more. Nothing Stays In Vegas is the first novel that I’ve made available but I’m working hard on my next project due out in late fall of 2011.