Begin a high-octane suspense ride that will grip you to the very end in Marty Steere’s Thriller Sea of Crises – 16 out of 17 Rave Reviews & Just $2.99 on Kindle 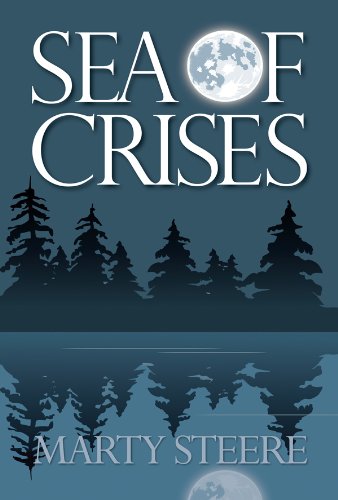 “That shouldn’t be here.”

Those are the last words uttered by Commander Bob Cartwright in September 1976, just before all communication with the crew of Apollo 18 is inexplicably lost during the astronauts’ first moonwalk.  Frantic attempts to re-establish communications with the astronauts are unsuccessful.  Three days later, however, as NASA is scrambling to put together a rescue mission, astronomers detect a burn of the service propulsion system, and, on schedule, but still in eerie silence, the command module begins its return transit, culminating in the welcome sight of the capsule descending majestically beneath a trio of parachutes into the South Pacific.

But when the hatch is opened, the navy divers tasked with assisting the astronauts into the recovery helicopter make a gruesome discovery.  The bodies of the three men inside have been burned beyond recognition, victims of a failed heat shield.  And with them has died any chance of learning the meaning of Cartwright’s enigmatic last statement or what transpired during those three blacked out days in the Mare Crisium, or Sea of Crises.

Unfortunately, unless and until man returns to the moon, it’s a mystery that will remain forever unsolved.

Thirty-six years later, Cartwright’s sons make a shocking discovery:  The capsule that came down in the Pacific Ocean with three charred remains was not their father’s capsule.  And the body they buried all those years before was not their father. What they’ve uncovered puts the three brothers on the run, chased by a ruthless group who will stop at nothing to preserve the secret behind the fate of the Apollo 18 astronauts.  The brothers will need to set aside past differences and pool their talents if they are to stay alive and unravel the mystery behind what really happened in the Sea of Crises.

Reviews
“Steere’s high-octane suspense tale takes off with all the intrigue and honor of the best space-age Westerns and political thrillers.” – Kirkus Reviews (starred review)

“Author Marty Steere is brilliant!… The action is non-stop and fast-paced and is mixed with just the right amount of mystery to make a perfect thriller…. [The] plot is plausible, the characters are realistic, and the writing is superb…so stunning a read that you will be unable to stop reading until the very end.” – Readers Favorite

The son of a career air force officer, Marty Steere grew up on or near military installations across the country and overseas before settling in Southern California, where, when he’s not writing, he practices law. Sea of Crises is his first novel. His second, Defiant Heart, is slated for release in early 2013.