Suzanna E. Nelson’s Award Winning True-to-Life Thriller Nightmare Along The River Nile: Abducted By The LRA – Inspired by Actual Events in Northern Uganda … 21 Out of 22 Rave Reviews & Just $3.99 on Kindle

Nightmare Along the River Nile: Abducted by the LRA 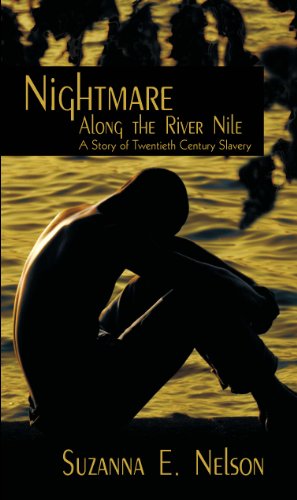 Elated after finishing high school exams, Edgar and his longtime friends are excited about their future and looking forward to their long vacation. Unbeknownst to them fate has other plans. Edgar’s life turns into a living nightmare when, on his way home, his bus is stopped by the LRA rebels in northern Uganda. Along with other passengers, most of whom are students, Edgar is abducted and taken to the rebel headquarters deep in the mountains of southern Sudan. Things turn even worse when, instead of being forced to become a soldier, he is sold into slavery. His life is changed forever.

Edgar’s friends learn of his fate and embark on a very difficult and unpredictable rescue mission. With the help of a fellow captive, Edgar attempts a daring and dangerous escape, knowing that his re-capture would end in a fate worse than death. But will he succeed? The dramatic finale awaits you as you follow Edgar while he is being chased down by warlords whose mission is to return him to the slave owners and collect a large reward.

The story gives readers an insight into the pain and suffering that Edgar endures at the hands of his captors; and his unshakable faith and hope of eventually being free. Through Edgar’s story, the reader will come to understand the resilience that human beings can exhibit under extreme circumstances, the power of faith and the meaning of true friendship. Looking collectively at the people who are involved in Edgar’s captivity and the ones who assist him, we are reminded that people are capable of good or evil, regardless of color or creed.

“This book does the outstanding job of creating awareness and teaching us about a horrific and ongoing human-rights abuse situation by way of a compelling action-filled story. It will be difficult for you to put this book down before you find out what happens to Eddie.” – Allbooks Reviews International

“The book is a good read, with important lessons about decency and true friendship and human cruelty.” – Africa Book Club

“This book was gripping in every way. I had every emotion known to man as I read it — happy, scared, angry, sad, and general disbelief that something like this can happen to a fellow human being and a young one at that.” – BookwormKala

“…I was moved by the ingenuity, courage and devotion of Edgar’s friends. That raised the story above the thriller category…” – Richard Sheeler

From The Author
This story was inspired by actual events that happened to many young boys and girls in northern Uganda in the 1990s. The story was conceived from many interviews that were conducted with survivors and former child soldiers who managed to escape the LRA.
About The Author

Suzanna E Nelson works for the United Nations and is a published author of two award-winning novels. Her first novel “Nightmare Along the River Nile” is set in Uganda and Sudan. It is a story about a student who was abducted by the LRA and sold into slavery. The second novel “The Helpers” is an international tale of espionage and corruption, and is set in Congo, Europe and United States.

Although both novels are fictitious, they were inspired by historical facts. ‘Nightmare Along the River Nile’ was inspired by actual events that happened to young people in the 1990s at the height of the LRA rebel abductions in northern Uganda. The story was conceived from many interviews that were conducted with survivors and former child soldiers who managed to escape the LRA. ‘The Helpers’ was inspired by colonialism in the Democratic Republic of Congo and how it led to corruption and terror.

Suzanna has lived and worked in Africa, Europe and United States. She is an advocate of human rights issues like anti slavery, protection of war children and child education.