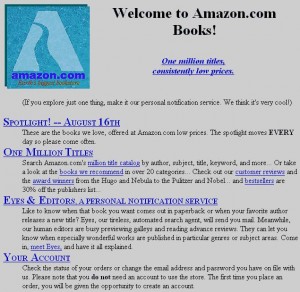 It will come as no surprise to long-time readers that, fairly consistently over the past two years, I have been saying something shocking and outrageous. My crazy notion first started cropping up in a Kindle Nation Daily post back on February 3, 2011.

How stunning a development would that be? Prior to the launch of the Kindle in 2007, Amazon was widely considered to account, at most, for somewhere around 15 percent of all U.S. book sales in all formats by all retailers.

There were plenty of people who were willing then to tell me I was nuts, or that it didn’t matter anyway because Amazon’s pricing was going to continue to drive the company toward, or right into,  red ink. (Indeed, that red-ink thing happened in Amazon’s last quarterly financial report, and the company says it could lose as much as nearly another half-billion dollars in its own guidance for the 2012 4th quarter on which its will report later this month.) And apparently my critics talked some sense into me, because more recently I have been projecting that Amazon was more likely to reach that 50% market share threshold in late 2013 or 2014.

So, it has probably not happened yet, and let’s give or take a year or so, please. After all, what would be amazing about this kind of development would have nothing to do with it being predicted (by me or anyone else), and nothing to do with it happening in any given specific month. (But since we all like to keep score, if it does happen by early 2014 I’d like to apply futurist Ray Kurzweil’s rule and call this prediction “essentially correct.”)

The amazing thing would be that, in three waves of about half a dozen years each, Amazon would have  completed a total transformation of the U.S. publishing and bookselling business. (Only the third wave, of course, has been strictly about ebooks.) And for better or worse, that transformation is a game-changer in every sector of publishing and bookselling activity including, of course, the activities of authors and readers.

The enthusiasm with which publishing industry pundits seek out data suggesting that “ebook sales growth is slowing down” make it unlikely that we will hear any announcement from within the industry when Amazon reaches that 50% threshold, but one of the smartest and most articulate inside observers of the publishing industry — consultant, author and blogger Mike Shatzkin — shared some data this week from which it is interesting to make some extrapolations, even with the caveat that Shatzkin’s information is anecdotal, based on “an exercise” that he tried earlier this month “of asking a few agents for their impressions of the evolving ebook marketplace.”

I won’t revisit here the various equations that I used in early 2011 to reach the conclusion that Amazon was on its way to reaching a 50% market share in the book business/all formats, other than to say that I relied heavily then on information reported by Publisher’s Weekly, Publisher’s Marketplace, and Amazon, and that actual events since then have served to confirm the conclusion. But let’s look at some of Shatzkin’s data points and where they lead.

He starts by saying that “sales of ebooks for fiction more often than not top 50% of the total sales,” and then says of total book sales that “only about 35% of it is selling as print in stores (because 25-30 percent of the print sale is online).”

That’s a total of 48 out of the 100 books sold by Amazon, or 48% market share based on units sold. Since all of this is anecdotal and the extrapolations themselves are based on assumptions, Nate Silver would probably tell us that it’s fair to say that Amazon’s actual fiction market share for the period we’re discussing was somewhere between 43 and 53%.

But it is worth pointing out, as well, that this anecdotal information shared with Shatzkin by literary agents is not a snapshot of where things stand today in January 2013. Instead, as Shatzkin points out “the data presentation which most shapes the agents’ impressions is provided in royalty reports. This past year, and especially this past season, have not yet been delivered in the data they study most intensively.”

When you take that “lagging report” factor into consideration, combined with recent reports that January 2013 ebook sales are up 10 to 15% over January 2012 ebook sales, it’s even possible that Amazon may have already reached a 50% market share for fiction.

Maybe, maybe not. It’s only fiction, not all book sales. But the nature of tipping points in the book business has several likely consequences for this discussion:

In our February 2011 piece raising the 50% market share possibility for the first time, I quoted Amazon executive Russ Grandinetti as saying: “However fast you think this change is happening, its probably happening faster than you think.”

That’s all we’re really saying. And in the next few days we’ll try to focus on what these developments could mean — in terms of ebook pricing, royalties, profitability, and in some cases life or death — for the players listed above.

2 Responses to
Amazon May Already Have Reached 50% Market Share of the U.S. Fiction Book Market Across All Formats