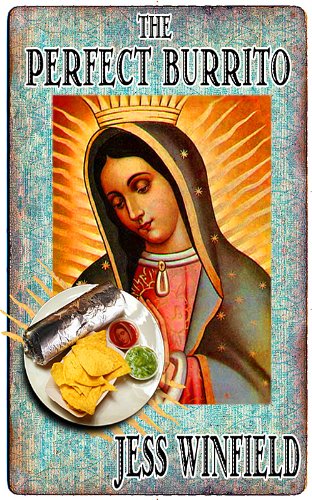 Twenty-one year-old Maria “Mary” Sanchez, a fully assimilated, half-Chicana Valley girl, joins a fifty-something food blogger, the self-styled “Don Miguel de Los Angeles no McDonalds,” on his Quixotic quest: walking from Los Angeles to San Francisco to find The Perfect Burrito. Written in Maria’s sassy first person narrative and Don Miguel’s comically “high-styled” blog posts, this multilayered novel is part Cervantes spoof, part eulogy for decimated California Indian cultures, and part mouthwatering foodie travelogue. Yet at its core is the emotional journey of Maria, a young woman caught between teenager and adult, American and Latina, and her curious attachment to Don Miguel, who has a mysterious love of all things Hispanic. The burrito serves as a kind of Grail, a symbol of Maria’s quest for cultural identity in a corporatized, fast food culture, the fulfillment (in every sense of the word) that both Maria and Don Miguel desperately seek. While the story is fictional, the burritos and California locations are real, and the e-book will provide links to both Don Miguel’s blog and a variety of extras: from Google maps of the journey to webisodes re-enacting scenes from the book to audiobook chapters, all hosted at www.theperfectburrito.com.

Jess Winfield was raised to write by his freelance journalist mother and Disney writer/producer father in the bohemian artists’ enclave of Lake Sherwood, California. At age nineteen, he co-founded the Reduced Shakespeare Company. He co-created the Laurence Olivier Award-nominated comedy THE COMPLETE WORKS OF WILLIAM SHAKESPEARE (ABRIDGED) and performed in it for many years, including launching its extraordinary decade-long run in London’s West End. After leaving the “other” RSC, he spent ten years writing and producing animated television and won two Daytime Emmy Awards for DISNEY’S TEACHER’S PET. His first novel, MY NAME IS WILL: A NOVEL OF SEX, DRUGS, AND SHAKESPEARE (Twelve) was a New York Times Book Review “Editor’s Choice” and a California Book Awards finalist. His second novel, THE PERFECT BURRITO (Oct. 2012) is an enhanced e-book featuring hundreds of original photo illustrations and videos. He is married and lives in Los Angeles.
App loading…

More Freebies & These Titles Will Keep You Laughing All Day – All Sponsored by Alexandra Brenton’s Tide’s Ebb – A Satire of Romance, Sex And The Legal Profession
Kindle Daily Deals For Sunday, Feb. 24 – 4 Bestselling Titles, Each $2.99 or Less! plus Stephen Peace’s The Secrets of Creative Writing

Sponsored by Jess Winfield, author of