Amazon announced an impressive array of new hardware and services at small-group briefings Wednesday, but the big news is the company’s introduction of the all-new Kindle Fire 6 tablet at just $99 — with a price, features, and hardware that allows the company to call it “the most powerful tablet under $100.” All of these models are available for pre-order right now, and all will begin shipping in October.

But that wasn’t all. The Kindle briefings also rocked some major new offerings in the all-important Kindle ecosystem for kids, in new eInk ereader hardware and software, in high-end Kindle Fire HDX 8.9 enhancements, and in family- or household-friendly features for most kinds of Amazon digital content across the full array of Kindle and Kindle-compatible devices:

We had a chance to test drive all of these models today and it’s a strong array that should help Amazon continue its dominance in the ereader and ebook markets while gradually carving out a larger slice of the tablet market. As impressive as the new hardware is, a lot of what Amazon rolled out today involved nice, incremental enhancements in ease of use and performance that will make a more gradual, but very positive impression on customers. Among these are free unlimited storage for photos taken on Fire devices, a Smart Suspend power-saving system,  “ASAP” for time-saving predictive streaming, and a new “Family Library” feature that allows family members to easily share apps, games, audiobooks, ebooks, and Prime Instant Video content, even if they use different Amazon accounts.

We’ll have more to share about all of this in the coming weeks and months, but we wanted to give an idea of what we all have to look forward to. 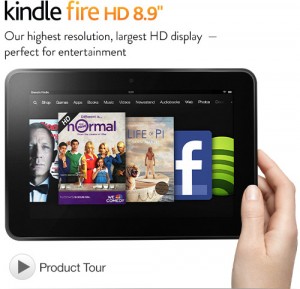 Limited Time Only, While Supplies Last!

For a very limited time, Certified Refurbished Kindle Fire HD 8.9″ is available as a Lightning Deal starting from only $189 (the 32GB version is available for just $219).

This offer is only valid during the promotion time and while supplies last. It must be purchased from the Gold Box page. Limit one per customer.

Blend a dollop of Enlightenment history and philosophy for the lawyers and history buffs, a skosh of cool technology for the geekish, and a smidgen of business for the Wall Street crowd. Add to a boiling cauldron of passion and violence. Sprinkle with strong dialog and wit. Stir vigorously. Shazaam! Tomorrow’s headlines today, in Patriot and Assassin.

Patriot and Assassin places the protagonist, Alejandro ‘Cooch’ Cuchulain, at the heart of a plot to release nerve gas in one of our nation’s busiest stadiums, then later into the sadistic hands of the terrorist who planned that attack.

Cooch leads a Rhodes Scholar former Seal, a stunning MacArthur winning physicist, a former USMC Master Sniper and the former director of the CIA’s special operations unit, now working in the White House. Together, they engage a large contingent of Al-Qaeda, among others, while working to improve the life of Muslims.

Inspired by Arab Spring evidence that Middle Eastern culture will be transformed positively when Muslims are convinced that transformation is in their self-interest, Patriot and Assassin uses the proven lessons of the Enlightenment to expedite that transformation. More than simply sex and violence advance the story. Patriot and Assassin incorporates strong character development and powerful, thoughtful dialogue to drive this politico-thriller at a breakneck pace.

The team neither disdains violence on this journey to improve, nor avoids using the latest technology to make both the journey and the violence easier. Action flows seamlessly from Texas to Washington to Morocco to Yemen and back.
Former CIA warrior Cuchulain is a strong male protagonist working with a dynamic female protagonist in Dr. Caitlin O’Connor. This thriller brings a fresh dynamic to the genre. Patriot and Assassin positions itself as the thriller for thoughtful readers interested in observing strong, complex characters meeting complex world-wide challenges.

Robert Cook is a United States Army Vietnam veteran, who attained the rank of Major and holds the parachutists badge, Bronze Star Medal and the Army Commendation Medal.

Cook was named the Ernst and Young Entrepreneur of the Year for the Metropolitan Washington, DC Region in 1987.

Mr. Cook is an active philanthropist. He endowed the Robert E. Cook Honors College of Indiana University of Pennsylvania that was recently covered in Donald Asher’s book, “Cool Colleges for the Hyper Intelligent, Late Blooming and Just Plain Different”. www.iup.edu/honors