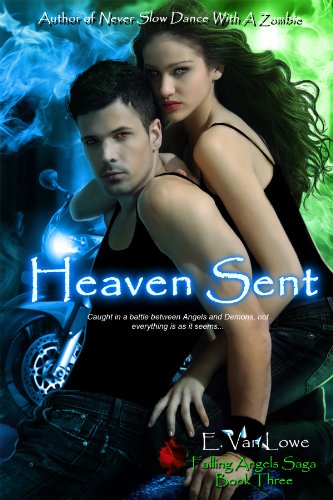 What Does It All Mean?

Readers who devoured “Boyfriend From Hell” and “Earth Angel” will be captivated by the third book in the Falling Angels Saga.

As summer break for Glendale Union high begins, heartsick Megan awaits Guy’s return while struggling to control her emerging abilities. Love is in the air, but can the new loves in Megan, Maudrina, Suze, and Aunt Jaz’s lives be trusted? Nothing is what it seems. Meanwhile, the Satanists are set to hatch their most diabolical scheme ever, and if it comes to pass, Satan may finally win out.

Megan has precious little time to unravel the cryptic message hidden in the riddle she received at the end of “Earth Angel.” If she doesn’t, the life of someone most dear to her will be lost forever, and Megan may yet find herself living in HELL.

The third book in E. Van Lowe’s Falling Angels Saga is his most thrilling yet.

“A thrilling suspense / mystery / fantasy book mixed with reality and some romance
scenes that will get you hooked up till the end.” -Lalaine Faye, Lalaine’s Fiction Book
Reviews

“Boyfriend From Hell was a great surprise. I didn’t know what to expect before reading
it but it was a fast and fun read that made me laugh more than once. What made
Boyfriend from Hell unique to me was the sometimes tongue-in-cheek tone it had. It’s a
great YA that’s also poking fun at some of the predictable Young Adult clichés.
If you like paranormal YA but sometimes find yourself rolling your eyes at the way the characters are acting,
you’ll love this book too.” –Lisa Choboter, Cold Moon Violet Books

“E. Van Lowe’s fluid and masterful writing made this book one that I needed to finish.”
-Elizabeth Talbott, Fishmuffins of Doom

“E. Van Lowe does a great job of capturing teenage angst, dating woes, and parental
issues without over-doing it. Earth Angel was just as fun to read as Boyfriend From
Hell.” -Nicole Etolen, Pretty Opinionated

“I just finished the last sentence and I’m left stung that I have to wait for the final book
to come out. I can’t wait! I loved the first book, and was so excited by a story of a girl
battling Satan.  I mean, how cool is that?” -Freda Mans, Freda’s Voice

E. Van Lowe is an author, television writer, screen-writer, playwright and producer who has worked on such TV shows as “The Cosby Show,” “Even Stevens,” and “Homeboys In Outer Space.” He has been nominated for both an Emmy and an Academy Award. His first YA Paranormal novel, “Never Slow Dance With A Zombie,” was a selection of The Scholastic Book Club, and a nominee for an American Library Association Award.  His Best Selling novels, “Boyfriend From Hell” and “Earth Angel,” are the first two books in the Falling Angels Saga.  “The Zombie Always Knocks Twice” is the first book in his Hollyweird series.
E lives in Beverly Hills California with his spouse, a werewolf, several zombies and a fairy godmother who grants him wishes from time-to-time.

The first book in my Hollyweird series, “The Zombie Always Knocks Twice” is now available. It’s another humorous zombie story, this time taking place in the world of Hollywood California. Another zombie story??? Yep. I’ve got zombies on the brain.

I write just about every day. I write all over the house, but my favorite spot is the dining room. It puts me closer to the food. In fact, I’m in the dining room right now (*munch, munch*). Please visit me at my blog, E’s blog, where I hold contests and giveaways, and share tid-bits as well as advice from my life as a writer. www.vanlowe.blogspot.com

And here, in the comfort of your own browser, is your free sample of HEAVEN SENT by E. Van Lowe: