One stately residence on North Carolina’s Albemarle Sound. Five stories of heart-warming romance. Told against the backdrop of the Civil War, the loss of an unsinkable ship, the patriotic zeal of the second world war, the heart-rending conflict of Vietnam, and the thrill of modern day Nascar, Jamie Denton, S. K. McClafferty, Kathleen Shoop, Marcy Waldenville, and J. D. Wylde deliver a variety pack of poignant, sexy, and sweet. 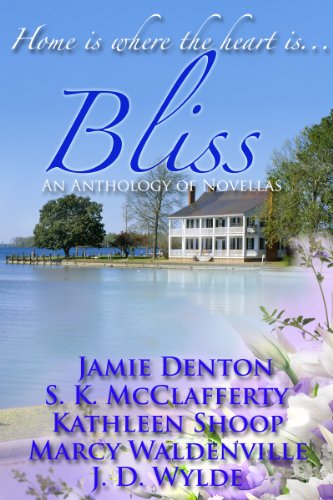 5.0 stars – 4 Reviews
Kindle Price: 99 cents
Text-to-Speech and Lending: Enabled
Don’t have a Kindle? Get yours here.
Here’s the set-up:

Home is where the heart is….

To some of us, home is everything.  Our connection to the past, a place in which to build a future, the only place to run when the world we know falls apart….

For Livie Harrington, Bliss is everything.  It’s a house comprised of memories, the last remaining link to her past.  In a life shattered by the War Between the States, Bliss becomes Livie’s anchor, the driving force behind her desperate scramble to rebuild a lost family fortune.  She’s lost her parents, her only love, and her brother is off fighting somewhere north of the Mason-Dixon.  She can’t lose Bliss, too… but what’s a girl to do besides the most outlandish, most lucrative endeavor to arise from the Federal blockade?

Everything is going well for Livie when a desperate need to be home invades her busy life.  A need she can’t ignore.  But waiting for Livie is a houseful of trouble… her dying brother, and the man who risked everything to honor a dying friend’s last wish… the very man who broke Livie’s heart long ago, and whom she thought never to see again….

A house built to outlast the generations….

After achieving great wealth, Colin Harrington, Livie’s grandson, travels to England to bring a bride back home to Bliss, stately seat of his empire.   He meets and marries Lady Jane, whose father is titled but debt-ridden, and before long, Jane is expecting Colin’s heir.  Yet, one ill-fated decision tears Jane’s world apart when the luxury liner HMS Titanic on which she and Colin are traveling hits an iceberg in the icy North Atlantic and sinks.

Facing a life without her husband is difficult for Jane, and if not for Bridgett, her lady’s maid, and the kind staff at Bliss, she might have lacked the courage to carry on.  A new home, in a strange new land, and the first thing she must do is bury her husband in the family plot.  Plagued by nightmares of the sinking ship, her health is in jeopardy, and it is decided that she needs a distraction to help her deal with her grief.

Bliss has everything… a sweeping expanse of lawn that borders the sound, tall trees, and lush bushes… everything but a garden like the one Jane left behind in England.  A garden on the scale of the one she is planning will require a gardener, and Jane’s handyman has the perfect candidate… handsome, earthy Brennan Brown.

The Irishman, like Jane, is newly come to America, and somewhat put off to be working for a member of the English aristocracy.  Yet, despite coming from very different backgrounds, the two strike up an unlikely friendship that soon lends to the melding of their hearts.  Yet, as Jane and Brennan feel the stirrings of a new love, outside forces threaten.  The mysterious Mr. Brown, like Jane, has come to the Carolinas looking for a new start…  leaving behind a past that comes back to haunt him, threatening not only his relationship with Jane, but his freedom.

A Wounded warrior comes home to heal and finds love where he least expects it….

Set against the backdrop of the Second World War, SPELLBOUND takes place in 1942. Colin Harrington, II, is a bit of recluse, ofttimes sullen, and has taken refuge at Bliss, his childhood home. A grounded pilot, Colin was wounded when his plane is shot down behind enemy lines. Now, he secretly works for the government as a code breaker.
Mary Elizabeth Callahan has forty-two cents left to her name when she arrives on Colin Harrington’s doorstep, desperate and in need of a job. When she’s offered the position of housekeeper, she’s grateful, but her relief is short-lived when her shameful secret is revealed.

Then, unexpectedly, Colin graciously offers her a solution, and Mary Elizabeth is torn.  The last thing she wants is for the safe haven she has found on the banks of the Albemarle Sound to become a place of entanglements and complications… yet how can she avoid it when an unexpected love enters into the mix?

A place where lives are lived, and new legacies are forged….

It is the tumultuous 1960’s, a time of upheaval and social unrest.  Scenes from the Viet Nam War are played out nightly in living rooms across the country, and the great house on the sound has passed into the care of another family.

April has fond memories of summers at Bliss, and after her fairytale wedding disintegrates, it becomes her refuge.  The one place where she can attempt to pull the threads of a life unraveling back together.  Yet, unbeknownst to April, the stately house has been neglected in recent years.  The once sound roof is leaking in a few dozen places, and the wharf is falling apart.  Nothing is the same as she remembers—except for Hale, a Viet Nam soldier who is haunted by a dreadful secret, and who is also her brother’s best friend. .. a brother killed in the conflict that is tearing the country apart.

In Hale’s presence, April finds familiarity, and solace.  They share a grief for a lost loved one, and from the comfort of his arms, passion blooms.  Yet, April’s future is unresolved.  A wealthy, arrogant almost-bridegroom wants her back… and the ghosts of Viet Nam are whispering to her new love.

The final resting place for a shattered marriage… or a cherished place to rebuid?

Bobby Wayne Forsythe is a NASCAR superstar on the verge of greatness that rivals that of The King and The Intimidator when a tragic accident befalls him and his career hangs in the balance. He returns to the one place where he can lick his wounds in private and come to grips with his own dark future… a house he shared with one wife, and desecrated with another.

Bobby Wayne has played it fast and loose, enjoying his celebrity status, and women have come and gone with regularity… but there is one woman he couldn’t forget… the one who shows up at his door unexpectedly.

Lauren Foster-Forsythe’s marriage to Bobby Wayne was bittersweet, and coming back to the home they shared is not an easy thing to do… but she desperately needs to put the past behind her, and get on with her life. When the Country Music star arrives at Bliss, the home she dearly loved, she finds herself confronted—not by a time-honored homeplace—but by a glaring tribute to Bobby Wayne’s career. The wonderful old residence has been completely redecorated by wife Number Four, and Lauren is horrified.

The mansion is not the only thing that has undergone drastic changes. There’s a change in Bobby Wayne as well, and though Lauren remains determined to lay their past to rest, she finds it harder to do with every kiss and shared intimacy.

Bobby Wayne is hard-bodied, and white-hot sexy, and they soon discover that they can’t keep their hands off one another. Lauren can deal with Bobby Wayne–or so she thinks… but how can she undo the desecration of Bliss… the monument to the love they shared together?