What Day is it? It’s Hump Day & You Are Almost Done With The Work Week! Reward Yourself With Discounted Bestsellers Including Sins of the Past: 5 Historical Novels of Mystery, War and Adventure – Just 99 Cents

Sins of the Past: 5 Historical Novels of Mystery, War and Adventure 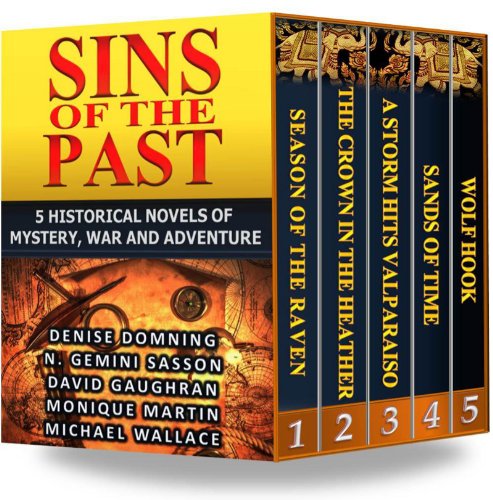 4.8 stars – 6 Reviews
Kindle Price: 99 cents
Text-to-Speech and Lending: Enabled
Don’t have a Kindle? Get yours here.
Here’s the set-up:

Take a sweeping journey through history and across the world with this limited-edition collection of 5 full-length historical fiction novels.

Sir Faucon de Ramis, the shire’s first Crowner, must make an official declaration of the cause of a miller’s death. But first he must thread the tangled relationships between the sheriff, the village of Priors Holston and the priory that once ruled it. As a simple task takes a turn to the political, what seems obvious isn’t and what appears safe turns out to be more dangerous than he could imagine.
____________________

Robert the Bruce faces love, betrayal and unlikely alliances in his rebellious bid for the empty throne of Scotland. But freedom, throne and wife together are not so easily won. Keeping his crown against Edward Longshanks’ son and new King of England — even with the aid of the brilliant James Douglas — may mean giving up what Robert loves most: his beloved Elizabeth de Burgh.
____________________

The Spanish Empire holds South America firmly in its grasp. Only a ragtag force of adventurers, mercenaries and prostitutes would be fool enough to make a bid for freedom: two brothers torn apart by love; a slave running for his life; a disgraced British sailor seeking redemption; and José de San Martín, an Argentine general who deserts the Spanish Army to lead a bloody revolt against his former masters.
____________________

High-spirited Elizabeth Cross and her brilliant Professor of the Occult husband, Simon, are in 1920 Cairo on a special assignment for the Council for Temporal Studies: Find a missing pocket watch and bring it back to the present. But a shadowy foe is also on the hunt … and after far more than a watch. The price for success this time just might be their lives.
____________________

Sometimes in war, a good man can be on the wrong side. Jim Heydrich, the nephew of a Gestapo kingpin — yet uncertain where his loyalties lie — finds himself a suspect of both the Nazis and the Resistance. His harrowing experience sets the stage for this immersive mystery that follows Jim across occupied Holland and Italy … right under the nose of the SS itself.