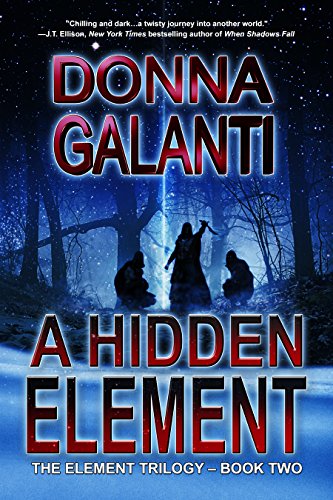 When Caleb Madroc is used against his will as part of his father’s plan to breed a secret alien community and infiltrate society with their unique powers, he vows to save his oppressed people and the two children kept from him.

Seven years later, Laura and Ben Fieldstone’s son is abducted, and they are forced to trust a madman’s son who puts his life on the line to save them all. The enemy’s desire to own them—or destroy them—leads to a survival showdown.

Laura and Ben must risk everything to defeat a new nemesis that wants to rule the world with their son, and Caleb may be their only hope—if he survives. But must he sacrifice what he most desires to do so?

“Chilling and dark, Donna Galanti’s A Hidden Element is a twisty journey into another world, where fathers and sons fight the ultimate battle, and ghostly strangers manipulate those left behind on Earth. Don’t miss it.” —J.T. Ellison, New York Times bestselling author of When Shadows Fall

“A Hidden Element is a fascinating look at the bleak and graphic world of the Elyon Destroyers, a humanoid race with special powers and a strong drive to endure and procreate at all costs, and other Elyons who struggle to stop them and save humanity. It is also a haunting story about just how far parents will go to protect, or destroy, their children in the name of love.” —Rebecca Cantrell, New York Times bestselling author of The World Beneath

“Donna Galanti’s A Hidden Element expertly mixes genres, combining sci-fi with mystery, thriller and romance. The result is a pulse-pounding read that will keep you up long past your bedtime, turning pages as fast as you can. If you love suspense, do yourself a favor and make Donna Galanti’s Element series your next read.” —Allan Leverone, New York Times and USA Today bestselling author of Final Vector