A novel sure to tug at the heartstrings of those who understand the depth of a mother’s love…
Halfway to Nowhere by Steena Holmes and Elena Aitken
75% price cut! 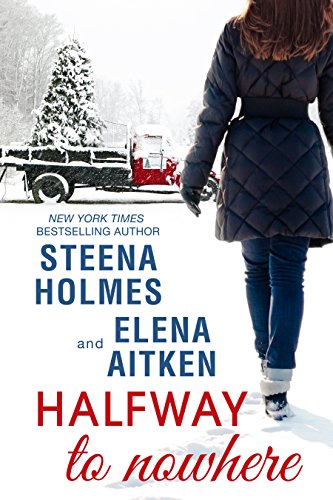 4.5 stars – 56 Reviews
Kindle Price: 99 cents
On Sale! Everyday price:
Text-to-Speech and Lending: Enabled
Don’t have a Kindle? Get yours here.
Here’s the set-up:

By NY Times & USA Today Bestselling Author Steena Holmes and Elena Aitken, comes their latest story sure to tug at the heartstrings of those who understand the depth of a mother’s love.

Nikki Landon walked away from her small town, Halfway, Montana, ten years ago, with no intentions of setting foot there again. But, when her mother dies unexpectedly, Nikki has no choice but to return, and this time with the child she was trying to hide—ten year old, Ryan.

Becky Jennings is living her happily-ever-after. She’s married to the man of her dreams and even though that means being the wife of a Christmas tree farmer, she’s happy. There’s only one thing missing from her fairy-tale life: a child to hold in her arms. After countless miscarriages, she’s struggling to accept that might be one dream that will never come true.

As teenagers, Nikki would have done anything to protect her best friend, Becky from heartache, which is why she left. But ten years later, there’s nowhere to hide in a small town where everyone can see the truth of the secret she can no longer keep.

Could Nikki’s son be the child Becky has always longed for? And if he is, can the already fragile bond between the two friends, withstand the heartache?

Visit their websites:
www.steenaholmes.com
www.elenaaitken.com
5-star Amazon reviews
“Tear jerking but lovely read…”
“This book is a must read. I cried like crazy and couldn’t put it down…”
“I loved this story! The emotions are raw, and real. The characters are beautifully developed…”
Don’t miss Book 2 in the Halfway Series:

Halfway in Between (Halfway Series Book 2)

Kindle Price: $3.99
Here’s the set-up:
Life hasn’t been easy for Melissa Tait-Rhodes — but then, how could it be since she’s been living a lie for the past ten years. A lie that has completely changed her daughter’s life and affected Parker, her brother-in-law in ways neither of them imagined. As the only one in town who shares her secret, it was natural for Melissa to lean on him. After all–he’s family.

When Nikki Landon decided to say in her hometown of Halfway, Montana, things with her new boyfriend naturally became more serious. In fact, things might be getting a lot more serious between them if it wasn’t for one thing–his all too involved sister-in-law getting in the way.

But there’s more to their relationship that anyone is admitting and when Parker finally comes clean with the truth, Melissa’s carefully constructed deception begins to crumble.

Secrets in a small town have a way of getting out, and if Melissa and Nikki aren’t careful, this is one secret that could destroy everything, including what they both want more than anything–to be with the one they love.