Everlast, a BRAINRUSH Thriller: Book One of the Everlast Duology 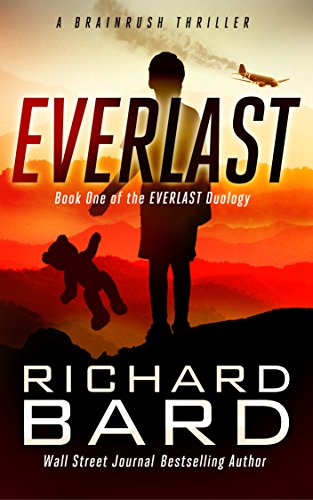 From The Wall Street Journal bestselling author Richard Bard comes the next highly anticipated “Brainrush” thriller, a mind-gripping adventure that spans three continents and two books – Everlast and Ephemeral. (Ephemeral was named one of IndieReader’s “Best Books of 2014.”)

A gifted boy forced to grow up too fast… A father who will do anything to protect him… A madman bent on destroying them both.

In Amsterdam, a visionary scientist is laying the groundwork for a cybernetic life-extension project that will transfer individual consciousness to a personalized avatar. Halfway around the world, his brilliant grandson is secretly planning to use the same technology to infiltrate the world’s most secure networks. But the scientific advances necessary to perfect the brain-to-computer interface are slow in coming, too slow for the aging founder of the Everlast foundation–who may die before realizing his dream of immortality–and too slow for his ruthless grandson, who will stop at nothing to attain the recognition that is his birthright.

Caught in the middle are Jake Bronson and his seven-year-old son, Alex, whose combined mental gifts might provide the key to leapfrogging the impasse.

Everlast (Book One): When Jake’s family and closest friends are simultaneously abducted in a globally coordinated kidnapping scheme, he races across two continents in his search for them, unaware his hostage son and teenage siblings have crash-landed in the jungles of South China, where they must find every ounce of their courage and wits to survive the wilds and escape the ruthless drug lord who is hot on their heels. Can a seven-year-old boy learn to kill to save his family?

IndieReader.com – “This is an action-filled book, stuffed with movement, danger, and tension from beginning to cliffhanging end.” The sequel, Ephemeral, was named as one of “IndieReader’s Best Books of 2014!”

KIRKUS Reviews – “High-speed espionage thriller with sci-fi touches that’ll have readers impatiently waiting for the next installment.”
Self Publish Review Magazine – “Fasten your seatbelts, folks. Richard Bard’s newest release, Everlast, is a thrilling, fast-paced adventure that will make your head spin.This cracker of a novel will delight his fans and will more than likely garner many more. Bravo, Richard Bard. Please keep writing.” 5 stars

a BRAINRUSH Thriller: Book One of the Everlast Duology, Everlast, RICHARD BARD

Is there any room for honesty in today’s American politics?
Glen Merzer’s hilarious political satire Off The Reservation: A Novel

67% off the only authorized biography of the original founder of the Crips:
I am Raymond Washington by Zach Fortier and Derard Barton