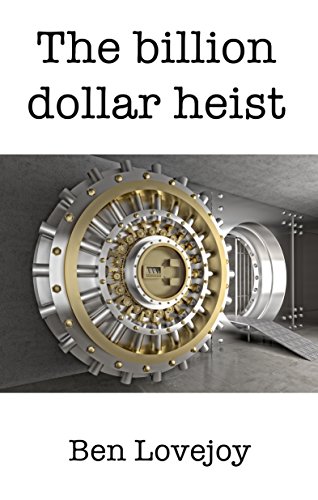 4.5 stars – 15 Reviews
Kindle Price: 99 cents
Or currently FREE for Amazon Prime Members Via the Kindle Lending Library
Text-to-Speech and Lending: Enabled
Don’t have a Kindle? Get yours here.

A billion dollars in crisp, newly-printed bills – the sum transferred daily from the Bureau of Engraving and Print in the run-up to the launch of a new bill design.

The BEP vault is the most secure in the world. No human being ever enters it: not even the President of the USA could gain access. Only pre-programmed robot vehicles pass through the 22-ton, 10-feet thick blast-proof door. The array of technology needed to unlock that door is utterly unparalleled.

The transfer operation involves the most heavily- armed convoy ever seen, from M2 Bradleys on the ground to Apache attack helicopters and F-16 fighter jets overhead. Twelve squads of Marines provide close-order protection.

Sullivan and her entirely unarmed team plan to steal the cash. All of it.

Pritchard and Daniels are the Secret Service agents tasked with reviewing security arrangements to ensure that such a theft is utterly impossible.

Only one team can succeed.

“A fantastic thrilling read.
The two teams, one trying to steal the money, and the other trying to prevent it, are made up of intelligent characters that make believable choices and decisions – at no time was I left thinking that the course of the action had hinged on someone doing something stupid. Instead it is a battle of intelligence and misdirection, with very little left to luck.
The techniques used for the heist are believable and are grounded in the real world. Similarly, the reactions to the heist reflect the planning and training that security forces do in order to counter this type of threat.
I enjoyed the story immensely, and hope that Lovejoy brings these characters back in other stories. ” – Amazon Reviewer

“This is the second of Lovejoy’s novels I have read and I enjoyed this one even more. This is a really well researched book and keeps you guessing. Only pick it up when you have sufficient time (ideal for holiday) as it will keep you hooked. It’s a great premise and the characters are well thought out and engaging. ” – Amazon Reviewer

Can the bad boy protect the good girl… Zeke is a mercenary. Greer is third gen military. Can they work together to complete the mission, and stay away from each other? Prisoner Mine (Base Branch Series Book 6) from USA Today bestselling author Megan Mitcham