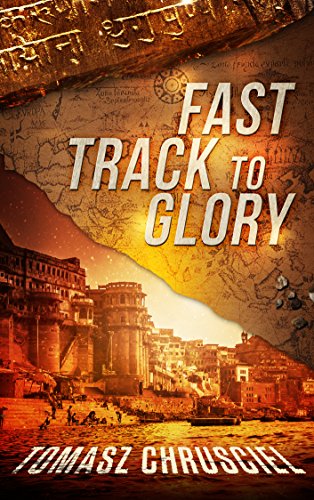 Nina Monte has worked hard to achieve her dreams. At thirty-six she’s one of Italy’s youngest professors, and renowned for her knowledge of the ancient world. Old religious texts might make for lonely companions at night, but that’s nothing a bottle of fine wine can’t fix.

When a mysterious summons presents a career-making opportunity, Nina can’t resist. A relic has been found in a 15th Century galley and it’s the kind of discovery encountered once in a lifetime. But floating atop the depths of Lake Garda at the recovery site, Nina senses something is amiss. With local hotelier, Alessandro Pini at her side, she begins to unravel the truth surrounding the relic. She soon realizes that questions of the past pale in comparison to the dangers looming in the present.

The mystical object in Nina’s hands is no trinket; it has the power to change humanity’s perception of existence. And many believe a gift like that is worthy dying—or killing—for.

Reviews:
“Fast Track to Glory is a tautly woven thriller somewhat reminiscent of Dan Brown’s The Da Vinci Code … Exotic sights, sounds and smells are described in sufficient detail such that they’re almost tangible, transporting readers to a special place where each new page heightens both the expectation and the odyssey!” – Marta Tandori for Readers’ Favorite
“The story is chock full of thrilling action, but balanced with subtle character development. Chrusciel artfully unspools the mystery of the artefact. His writing is polished to a high sheen with taut pacing and fantastic characterization.” – John Murray for IndieReader
“Fast Track to Glory joins the tradition seen in the film versions of The 39 Steps, Three Days of the Condor, and The Bourne Identity.” – Dr. Wesley Britton for Bookpleasures.com