The Atlantis Stone (The Project Book 12) 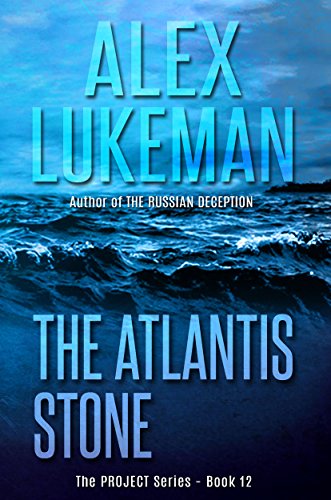 A photograph forgotten for a hundred years holds the key to finding the legendary lost civilization of Atlantis and an ancient artifact of mysterious power. When a letter with the photograph and a faded map of Egypt shows up in the mail, the Project is launched into a search that takes them from the depths of the Atlantic to the sands of Egypt and places unseen for thousands of years.
Elizabeth Harker’s Project team is caught up in a power struggle between two of Russia’s vast intelligence services. As the trail to Atlantis emerges from the mists of the past, the team is stalked by agents of a man who will stop at nothing to gain another rung on the ladder of his ambition.
Whoever succeeds will gain knowledge to benefit the world or destroy it. The stakes don’t get any higher…
Can the Project keep the secrets of Atlantis out of the wrong hands?

“This series keeps getting better. The characters are well developed, but even after twelve books, we still learn more about them. The writing is very descriptive as scenes are more like you’re watching them rather than reading them. The combination of history and action make this a very compelling novel. Well done. Looking forward to what is next for the team, after their well deserved vacation. ”

“Another high energy, extraordinary , believable action thriller of the highest pedigree!!! Evidence of Atlantis is discovered. The covert team of POTUS is activated. The Russians counterpart is also tasked to discover, undermine and if necessary eliminate the American agents. An extremely creditable story , non stop action….I highly recommend this book!!!”

Become a fan of Alex Lukeman on his BookGorilla author page!

How do you choose? Do you follow your heart, or do what is right? Find out in Love Or Justice (Protect and Serve Book 1) by Rachel Mannino for the low price of 99 cents!

Don’t Miss Out! Enter for your chance to win an Fire HD 6! Author Al Moe dares to give you the true history of Vegas in Vegas and the Mob.