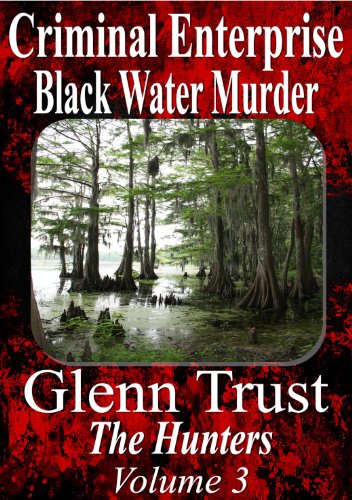 Hidden away in the black water swamps of southern Georgia a criminal enterprise is spreading its tentacles, leaving blood, bodies and pain in its path. An alliance with a Caribbean cartel gives the southern mobsters the international reach they require for expansion and export of their terrible merchandise. Nothing will stand in their path, except The Hunters.

Teamed together as part of the governor’s Office of Special Investigations,George Mackey, Sharon Price and Andy Barnes go undercover to break up the crime syndicate. Supported by pilot Johnny Rincefield and rookie sheriff, Jake Beery, the hunt takes them to the black water of the Okefenokee Swamp and a deadly confrontation with an unlikely suspect.

Reviews:
“Reading a Glenn Trust is like opening a newspaper because of the reality of the story. This one deals with the dark world of human trafficking and sex slaves. The characters are fascinating and the plot keeps the reader entertained and mesmerized. This is a great suspense story told by an amazing story teller. I love the feel of the locations in the book and the authors wonderful writing style.” – Verified Purchased Review
“This is my second book in the series, and I liked it even more than the previous book. At the end, the term “The Hunters” was explained and applied to the main characters out to end serious crime in Georgia. Fast-moving, it was always hard to put the book down. My only problem with these books is the amount of violence in them. The bad guys seem to want to kill everybody and almost do. Still, a riveting story I definitely recommend. ” – Amazon Five Star Reviews
Learn more about Glenn Trust and become a fan on his BookGorilla author page

The sex is hot. The emotions are high. But can they trust each other when opposites attract in this FREE contemporary romance by Tamara Lush. Tell Me a Story (The Story Series Book 1)

Sometimes you need help to find love and sometimes the matchmaker finds a love of her own…. Seduced at Sunset (Pembroke Palace Book 6) by Julianne MacLean