What is the personal cost to those who devote their lives to preventing nuclear war? Cold War spies face nuclear menace in A.G. Russo’s OFFENBUNKER 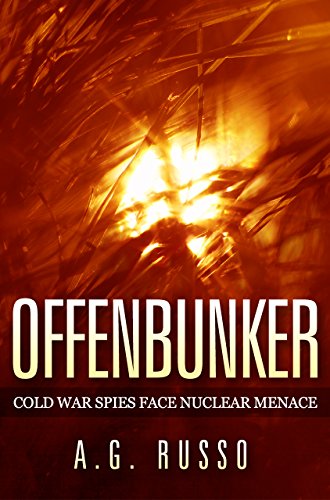 A top secret bunker deep in the Blue Ridge Mountains. A silo housing a ballistic missile.

Cold War super powers the United States and the Soviet Union are engaged in an intense “arms race” build up of nuclear weapons and face off for control as the fate of the free world hangs in the balance.

The CIA, U.S. military intelligence, spies, double agents, the KGB, Stasi secret police, and assassins engage in a dangerous contest of espionage as Russia wants to spread communism and take control of Europe, and the United States wants to stop them.

“As subterfuge, espionage, and special interests form the foundations of a powerful story that revolves around the bunker, Russian influences, secrecy, and a romance turned into a nightmare, readers are treated to a changing series of events that considers a timid daughter’s dangerous position as a pawn in a deadly game.” D. Donovan, Senior Reviewer, Midwest Book Review

“Great novel full of history and intrigue. A fast read that you will find hard to put down. If you are interested in the time of the cold war and the struggles between America and Russia, this book is for you. The perfect kind of mystery.” 5 star Amazon review

Enjoy A.G. Russo’s Books? Tell us Why and Win a Free Book!
Authors and Publishers: How to Sponsor Kindle Nation Daily