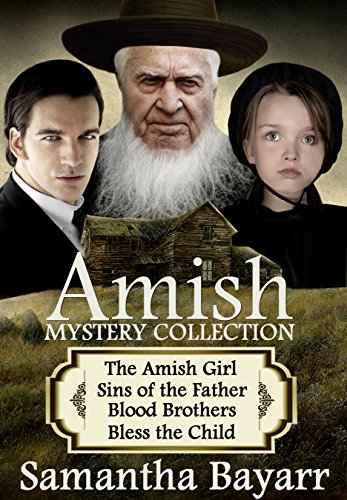 1. The Amish Girl: At the tender age of ten, Amelia is orphaned when her parents are murdered because of a crime they were accused of committing during their rumsrpinga. When she returns to her childhood home, strange and frightening events warn that she will soon become a victim of the same fate if she is unsuccessful in solving the crime even the authorities couldn’t solve. The secret she uncovers beneath the decaying floorboards of her dilapidated home makes her wish she’d never returned… and her parents are too dead to give her an explanation.

2. Sins of The Father: When Kyle finds a barely-conscious woman on Zeb Yoder’s property, he wonders if she was trying to break into the barn, or if she was running from it.
When he begins to unravel the mystery of her identity, the secrets are a little too close to home; secrets someone will kill to keep them secret.
Will Kyle find out who she is before it’s too late for both of them? Or are they in danger of being murdered by someone they both know?

3. Blood Brothers: Seth and Kyle grew up believing they were cousins, and had made a blood-brother pact when they were young. But with that pact came responsibility. After years of not seeing each other, Kyle must go in search of Seth to make good on that pact. But does that pact involve murder?
How many more secrets will they find buried on Old Man Yoder’s farm?

4. Bless The Child:  When Amelia interrupts a man in the process of kidnapping her infant son, Gabriel, she feels her only choice is to bargain with the man, and convince him to take her too. Being held for ransom by a man who thinks there is still money left from the robbery her parent’s committed almost twenty years ago, she begins to realize there may have been more to that crime than she’s originally thought. In a race to get herself and her son rescued, Amelia puts coded messages in the ransom letters the man forces her to write. Will her husband and family be able to decode her pleas for her life before it’s too late?

Kindle Fire Giveaway for May 28: Subscribe free for your chance to win! And you can help keep the good times rolling by following today’s giveaway sponsor, Jenni Ogden, and checking out A Drop In The Ocean!
Is William her otherworldly protector, or is he the dark creature who killed her mother eleven years ago? Find out in Catherine Mesick’s paranormal coming of age story Pure (Book 1, Pure Series)!