By Kindle Nation on September 13, 2019 in Romance of The Day

Leave Me Breathless: The Moonflower Collection 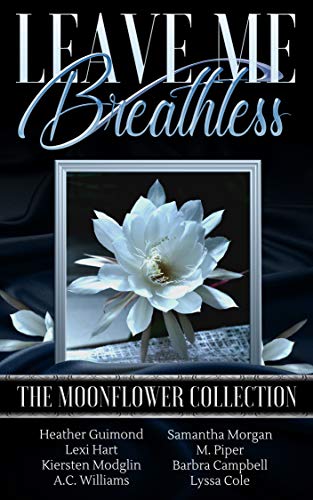 The Moonflower symbolizes dreaming of love. The collection will feature books from Heather Guimond, Lexi Hart, Kiersten Modglin, A.C. Williams, Samantha Morgan, Barbra Campbell, Lyssa Cole, and M. Piper. The Moonflower Collection can all be read as stand-alone books, guaranteed to give you a happily ever after and leave you breathless! What will it take to tempt you?

Break Wave by A.C. Williams, Amazon Bestselling Author (Second Chance Romance)
Jordan Stone is a small-town girl with big time dreams. Stepping out of the rubble of a tumultuous past, she’s working on a dream: Escaping Break Wave, New Jersey. Achieving that dream will come at a cost, though. The question is, will Jordan Stone risk everything that is dear to her for a one-shot at a better life?

The Plan by Kiersten Modglin (Second Chance Single Parent Romance)
Twelve years ago, Darby made a choice to walk away from the future she’d always envisioned with the boy who broke her heart. Now, two failed marriages, four kids, and years of baggage between them, Luke and Darcy are in their hometown again. Can the couple get back on course to live out the plan they once had? Or will the past be enough to make them run once again?

Scars by M. Piper (Second Chance Police Romance)
Returning to her small hometown to deal with the loss of her father, Kate doesn’t expect to connect with those from her past. She definitely doesn’t expect to fall for her high school sweetheart, the boy that pushed her away so many years before. Sparks fly as old flames are reignited, but is Daxon’s love enough to keep Kate from returning to the life she left behind?

Fight Me by Samantha Morgan, USA Today bestselling Author (Second Chance Sports Romance)
Hunter is the best boxer in the world. Cassie is a fighter who needs a chance. After a debilitating injury that prevents him from fighting again, his agent suggests he train others. At first, Hunter refused and then she walks into his gym…

Kinky Ink by Heather Guimond (Opposites Attract Romance)
Tired of his shallow and pretentious life as the heir to an oil resources empire, Nate Trumbull left Manhattan behind when he bought a chicken ranch just outside Corpus Christi, TX. He never bargained on falling for sexy tattoo artist, Roselle Wolfe, when he faints dead away in her chair. When his father comes to call to bring him back into the family fold, it spells trouble for the two. Will Nate stay and fight for his new life and love, or will he return to honor his family duty?

Becoming His World by Barbra Campbell (Second Chance Romance)
Samantha struggles to cope with a miscarriage when the baby’s daddy finally decides to show back up. Connor apologizes, professes his love, takes care of her, and does all the right things…until he leaves again. He won’t come clean about his job, and she can’t handle his obsession over her safety. Should she trust his mysterious ways, or follow her own path and live out her dream to sing on Broadway?

One for the Road by Lexi Hart (Bad Boy Romance)
After a five year absence, resident bad boy Mason is riding back into his hometown for the weekend. Celeste isn’t the chubby geek who crushed hard on the town’s rebel all through high school anymore. She’s spent the last five years waiting for a chance to purposely bump into the rogue with a reputation for breaking good girls’ hearts. And she has no intention of letting Mason slip away without getting what she craved all through high school.

Promise Me Tomorrow by Lyssa Cole (Second Chance Romance)
I fell in love with him when I was a child, watching from afar as he would catch butterfly after butterfly for me. As teens, our love grew stronger into one that lasts a lifetime. But one car accident left everything destroyed, my memories stolen from me, even the ones of him. Yet years later, he’s still waiting for me to come home and when I finally do, he’s determined to make me fall in love with him all over again.

Leave Me Breathless: The Moonflower Collection

When love drives you to war and war drives you to addiction, the journey home can be long and twisted…
Finn Again by Lynda Meyers
An embittered and disillusioned policeman takes revenge on society in this unputdownable serial killer thriller…
ONE STEP AHEAD by Denver Murphy