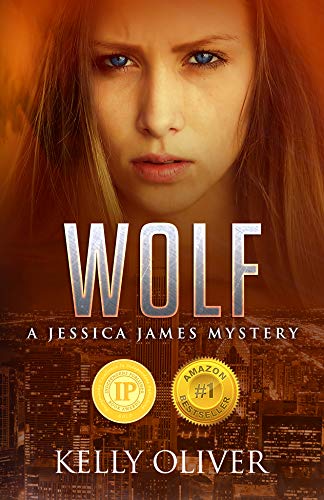 She just wants her degree. But when her professor is found dead in a bathtub, her real education begins…

Over 200 Five-Star Reviews on Goodreads and Amazon.

Jessica James is broke and counting down the days until she can defend her philosophy thesis. Desperate to get out of her grubby attic digs, she and her friends break into her professor’s office… only to find her adviser dead in the tub. Scoping the crime scene for clues, she leaves evidence that makes her both a suspect and a target.

Suspecting the school’s Russian janitor of doing more than sweeping the floors, Jessica mounts an investigation to clear her name. And when her ragtag posse helps her uncover a related date drug scandal, repeated attempts on her drink make her fear she’s the next on the killer’s to-do list.

Can Jessica unmask the murderer before her degree gets buried six-feet-under?

WOLF is the first standalone novel in the exhilarating Jessica James mystery series. If you like sassy detectives, irreverent humor, and nonstop action, then you’ll love Kelly Oliver’s hilarious adventure.

Nobody tops Kelly Oliver for delivering fast-paced narrative, quirky characters, and a plot as twisty as a bucking bronco–all of this leavened with Oliver’s trademark wry humor.—Caroline Taylor, author of Loose Ends and The Typist

What Amazon readers are saying:

★★★★★ “Wolf is hilarious, irreverent, and clever, action-packed with surprising twists, the writing is witty and engaging, but what I loved the most about the book are the strong female characters.”

★★★★★ “Exhilarating read with all sorts of twists and turns. Jessica James is smart, bold, vulnerable, pretty and clumsy all at the same time. She defies any stereotype of a female lead, and this is a very good thing.”

★★★★★ “A unique and compelling mystery, engaging important social and political issues with brains, humor, and heart.”

★★★★★ “Clever and funny along with being a great mystery!”

★★★★★ “Fun read and a great mystery with strong female characters.”

WOLF has Oliver’s trademark humor and quirky characters. Join Jessica and her posse for this fast paced thrill ride.