A quick trip through a wormhole has turned into an epic journey of biblical proportions. The saga begins… Moraturi Lost: Paradisi Chronicles by Marti Ward

Claire finds herself in a desperate race to the border, hunted by the KGB and the Czech secret police… Charles Bridge: A novel of the Cold War by Jefferson Flanders

Ithsar, born with deformed fingers, has been scorned and maltreated all her life. She’s secretly learned to fight back… Sea Dragon: Riders of Fire, Book Six by Eileen Mueller 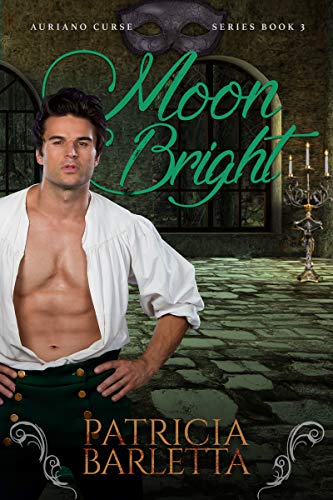 – Learn More
Text-to-Speech and Lending: Enabled
Enjoy Patricia Barletta Books? Tell us why and WIN a chance for a FREE ebook!
Here’s the set-up:

Allegra D’Este, Princess of Auriano, is a woman living under a deadly curse on her family, invoked by the evil sorceress, Nulkana. Having grown up in a convent in France, Allegra despairs of ever living a normal life. Only finding the magical Sphere of Astarte will break the curse. Until then, her life will always be in danger. Fleeing to Bath, England, she meets the devastatingly handsome Earl of Hawksmoor who presents a different kind of danger to Allegra—one that could break her heart.

Sebastian Fox, Earl of Hawksmoor, is an English spy, posing as The Messenger for the Legion of Baal, a nefarious group of men plotting to take over England and Europe through black magic, manipulation, and murder. They also search for the magical Sphere, for it will bring them great power. Sebastian has thwarted them at every turn, but now matters are dangerously spiraling out of control.

When Sebastian encounters Allegra in Bath, he is immediately taken with her beauty and charm, but it is her courageous soul that leaves him in awe. Aware of the Auriano curse, Sebastian is determined to keep Allegra safe. But can he protect her from the Legion of Baal and evil Nulkana without revealing his alternate identity? More importantly, can he keep himself from falling in love? For that is a goal for which he is entirely unworthy.