The Fallen (The Greatest Sin Book 1)

by Lee French and Erik Kort 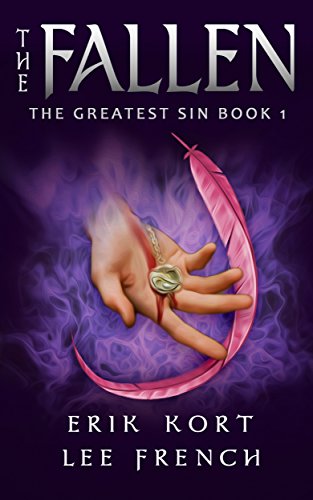 – Learn More
Text-to-Speech and Lending: Enabled
Enjoy Lee French, Erik Kort Books? Tell us why and WIN a chance for a FREE ebook!
Here’s the set-up:

There are always people who want secrets…

…Some will do anything to get what they want.

What would you die to protect?

For hundreds of years, the Blaukenev clan has wandered across Tilzam, from one end to the other and back. Each wagon carries history, love, laughter, pain, sorrow, and secrets. Their greatest secret of all may be Chavali, the clan Seer.

With her unusual form of telepathy, nothing surprises her anymore. No one keeps secrets from her. She, on the other hand, has more than enough secrets to keep. Secrets of her own, secrets of her clan, secrets of the world, secrets she even keeps from herself.

When the outside world refuses to leave them alone, will Chavali’s razor wit prove enough to keep her clan? Or will the fires of rage tear them apart?

You’ll love this epic snark fantasy because everyone enjoys a fast-paced series opener.

“In this brooding series opener, Kort and French insightfully explore staple fantasy elements, such as telepathy and resurrection, to luminous effect. …  A fast-paced series opener that will make readers eager to know Chavali’s next move.” —Kirkus Reviews

Can Adele really trust Logan – or is she just a puzzle piece in his outrageous plan? Mia Faye’s enemies-to-lovers romance UNDER HIS CONTROL
Malala was taught to stand up for what she believes. Now she is the youngest ever Nobel Peace Prize winner. This is her story….Free for a limited time: I Am Malala by Malala Yousafzai