FBI Special Agent Matthew Roarke uncovers the shocking truth of a female serial’s background. It’s a race to capture her before more blood is shed…
Huntress Moon by Alexandra Sokoloff 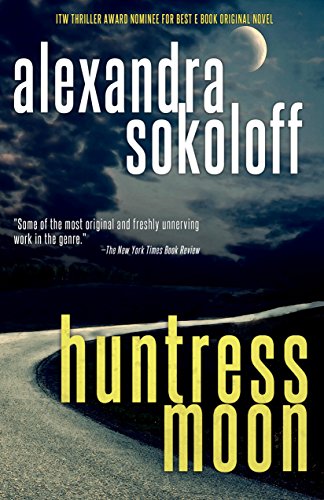 A Thriller Award nominee for Best eBook Original Novel… Book 1 in award-winning author Alexandra Sokoloff’s riveting new Huntress FBI series about a driven FBI agent on the hunt for that most rare of all killers: a female serial.

FBI Special Agent Matthew Roarke is closing in on a bust of a major criminal organization in San Francisco when he witnesses an undercover member of his team killed right in front of him on a busy street, an accident Roarke can’t believe is coincidental. His suspicions put him on the trail of a mysterious young woman who appears to have been present at each scene of a years-long string of “accidents” and murders, and who may well be that most rare of killers: a female serial.

Roarke’s hunt for her takes him across three states…while in a small coastal town, a young father and his five-year old son, both wounded from a recent divorce, encounter a lost and compelling young woman on the beach and strike up an unlikely friendship without realizing how deadly she may be.

As Roarke uncovers the shocking truth of her background, he realizes she is on a mission of her own, and must race to capture her before more blood is shed.

This is a new release of a previously published edition.

“Some of the most original and freshly unnerving work in the genre.” —The New York Times Book Review

“This interstate manhunt has plenty of thrills…Sokoloff’s choice to present both Roarke’s and the killer’s perspectives helps keep the drama taut and the pages flying.” —Kirkus Reviews