83% off in Contemporary Fiction! If you like films like ON GOLDEN POND and ORDINARY PEOPLE, you’re in for a treat! To Leave a Memory by Pat Dunlap Evans

To Leave a Memory: A Warm Coming Together 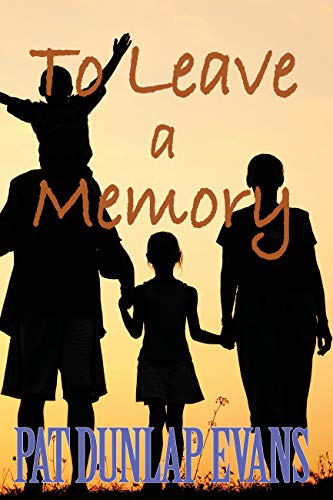 – Learn More
Text-to-Speech and Lending: Enabled
Enjoy Pat Dunlap Evans Books? Tell us why and WIN a chance for a FREE ebook!
Here’s the set-up:
If you like heartwarming films like “On Golden Pond,” you’ll love To Leave a Memory, the moving story of a troubled family’s victory over a devastating tragedy. The clever dialogue, surprising humor, and the poignant ending will make you feel like the characters of the Ward family are just like your own.

Editorial Praise for To Leave a Memory

“A warm portrait of a family coming together to forgive … the colorful dialogue keeps the story moving … There’s a pleasing amount of healthy talk about sex … Forgiveness comes in moments sentimental but tender, and even Andrew Ward’s post-stroke syntax has a chance to shine.”
— Kirkus Reviews

“You’ve written a wonderful story. By the end, the characters have become as much family to the reader as they are to each other.
— Jean Jenkins, Editor, San Diego, MSRewrite.com

“Debut author, Pat Dunlap Evans has written a poignant literary novel that explores an ordinary couple’s enduring relationship years after a family tragedy. The story is told from the point of view of both the husband and wife who are reminiscent of Henry and Olive in Pulitzer prize winning Elizabeth Stout’s novel, Olive Kitteridge. The writing is crisp and the ending takes a surprising turn.
— Lara Reznik, best-selling Amazon author of The Girl From Long Guyland and The M&M Boys

To Leave a Memory — About The Story

When history professor Andrew Ward ignores his wife Lizzy’s premonition that something will happen if he allows their son to go out one stormy night, tragedy strikes. Andrew is too anguished to admit he was wrong and, over the years, he and Lizzy drift into avoidance.

Forgotten in the marital divide, young daughter Jane can’t forgive her brother’s death. Nor can Andrew’s brother Thomas, an arrogant millionaire and a perpetual prickle in Andrew’s side.

When Lizzy decides to leave, Jane — who is now a tech guru and mother of three — urges her mother to repair her marriage. Oblivious to the women’s plans, Andrew hides in his office, trying to write a grand apologia to atone for his heartbreaking error. But when a second tragedy strikes, each family member faces a choice that no one wants to make. And Andrew must find the way to leave a memory.